Charlie Sheen will not be silenced by the law or anyone else. The actor is furious over a recent custody decision and is risking jail time to talk about it. 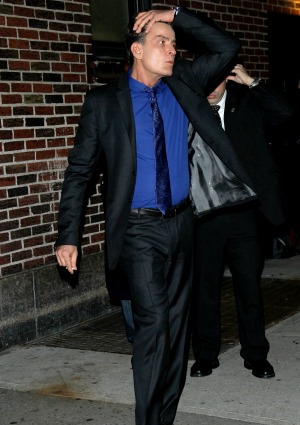 Like a gag order could ever silence a warlock…

Charlie Sheen is so angry about a recent decision to allow Brooke Mueller’s brother to take custody of his sons while living with her that he is violating a gag order to express his rage.

The Anger Management star was told by a judge that he is not to discuss Mueller or the custody issue at all anymore after going off on his ex on Twitter and bringing a ton of media attention to the case. He managed to be quiet for a couple of days — and then all hell broke loose.

Sheen sent forth a torrent of hateful tweets Friday night, calling the judge who placed the protective order against him an “anus-brain” and Mueller an “adderol [sic] snorting husk.”

“so lemme see if I got this straight.
my twin boys are now in harms way and in grave danger.
being ‘raised’ by a gaggle
of incompetent and lascivious
marionettes all ruled and fooled by an adderol snorting
husk called Brooke.”

“and guess what CPS and
‘I’m Italian’ judge anus-brain,
you may have gagged me temporarily, but mark my unspoken words,
anything happens to my boys,
and you will know get to know me,
know who I truly am,
a loving father.
tag — I’m it.”

“and if this means being jailed for loving and trying to protect my children,
then go for it.
I have as many friends on
the inside as i do out here.
my passion WILL NOT be silenced.
you are all now standing in my way.
I’d recommend a shift in
your geography.”

Mueller’s brother was granted temporary custody after Denise Richards said she could no longer care for the boys because she was prevented from getting them help for their abhorrent behavior.

So what are the chances this tirade will land Sheen in jail? Pretty good. The judge flat-out told him earlier this week that if he violates the gag order, he is heading to the slammer.