Spoiler alert! The following review contains major spoilers for Reign‘s oh-so-good episode, “Hearts and minds.” Read on if you dare. 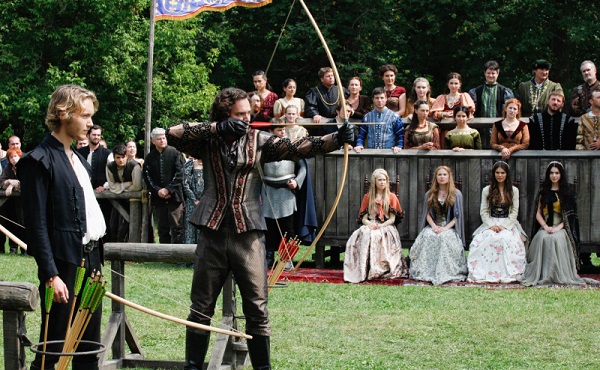 Just when I was about to give up hope on Reign, “Hearts and Minds” reeled me back in! This week there was murder, intrigue and, yes, sex. The coupling may not be everything I’d hoped for (yet) but it’s still lookin’ good.

So, was Tomas a murderer?

Probably. But, it doesn’t particularly matter now because he’s dead.

In the sneak peek for this week’s episode, we learned that Tomas was suspected of murdering his first wife. That put everyone on edge. Even as Bash healed from last week’s sword wound, he prepared to investigate and take things into his own hands. Francis’ investigations into Tomas’ wife’s death were put on hold when Francis figured out that it was Tomas that set up Bash to be sabotaged on his way to send troops to Scotland. Why? Because if France couldn’t help Scotland, then Mary would be forced to turn to Portugal and Tomas for help.

Despite having a whole army of knights and guards at their disposal, the miraculously almost-healed Bash and Prince Francis set out on their own to find Tomas and demand the truth. What became of the situation was an epic sword/arrow fight. While I can’t imagine a situation in which a prince and a royal bastard would actually be allowed to ride off into the (possibly haunted) woods, it was still an awesome scene. Who knew a bow and arrow could come in handy during close-combat? Tomas, apparently. Weird. In the end, when Francis was just about to lose, he plunged a dagger through Tomas’ heart and all was well.

France wrote off Tomas’ murder to a hunting accident and peace remained between the two countries. Then, King Francis was nice enough to restore Mary’s engagement to Francis. Not only did Mary get her beloved back, but she also managed to land armies and a few other promises from Henry. Why? She’s the one who figured out that Englishman Simon wasn’t to blame for Bash’s stabbing, as everyone originally thought.

In other words, a lot of drama wrapped up in an incredibly small amount of time. Luckily, it didn’t feel particularly rushed. Plus, everything is almost back to the way it’s supposed to be!

Honestly, I’m incredibly happy Mary (Adelaide Kane) is no longer with Tomas. Dude was creepy even before we learned that he may have killed his wife. Plus, she really wants to be with Francis (Toby Regbo) and I’m glad she’s finally sort of getting it. Except, it’s still just an engagement. No wedding date is set. It’s still possible for King Henry to find a way out of the promise or for his queen to just kill Mary in order to try to stop Nostradamus’ visions from becoming reality.

Mary needs to be careful, too. As much as I enjoy a fun, romantic tryst, a lady’s V-card was a much bigger deal then than it is today. Giving people any reason to spread rumors about her chastity would not be in Mary’s best interest.

Also, I’m still waiting for Mary and Bash to interact more together. Isn’t that supposed to be a thing?

This week, Bash seemed almost infatuated with Lola (Anna Popplewell). The whole thing made me sick. And not just because I think Lola is the most ridiculous name ever for a lady-in-waiting to Mary Queen of Scots or because she’s downright annoying. They just have zero chemistry. Literally, when I see Lola and Bash (the incredibly good looking Torrance Coombs) together, I almost wonder if we’ll find out Bash bats for the other team. There’s nothing there. No sparks. Nothing. Lola seems to be in love with him, even showing up at the costume party where a similar outfit to the one in the book she was reading to him when he was ill. And while, yes, Bash conned her into staying by his side when he was on his deathbed, that still doesn’t mean they have chemistry. That means he thinks she’s better looking than Nostradamus. I’m just not feelin’ it.

The steamiest moments of the night came when Kenna and the king finally found themselves in bed together. It’s been a bumpy road for them. First, the king wanted her, but Kenna was trying to remain chaste. Then, when Kenna changed her mind and said she wanted to be his mistress, the king refused. He already had a mistress. He just wanted a quick romp with a pretty young thing. By the end of the hour, though, the king saw no problem in having a second mistress… especially one so pretty and young. A real lady-in-waiting to Mary Queen of Scots would have been in her mid-teens, which makes for a rather creepy premise. However, I don’t think such age gaps were such a big deal back then: Kings just took what they wanted. I’m also under the impression that these girls are probably at least a few years older. Kenna and Greer even look and act older than Mary, so they might be old maids (read: early twenties). Also, the King is hot, so all is forgiven.

What do you think? Are Bash and Lola a match made in heaven or hell? Will Mary and Francis end up together in The CW version? Is the king and Kenna’s relationship creepy or OK?