Kanye West, James Franco, Selena Gomez and Lindsay Lohan are just a few of the stars who open up about Los Angeles in 30 Seconds to Mars’ new video “City of Angels.” 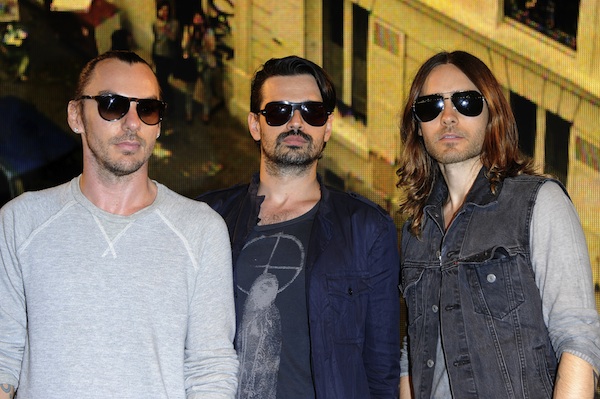 They say you’re either a New York person or a Los Angeles person.

I am an LA person.

There’s nothing like the neon lights on Sunset, holiday shopping at The Grove, and the oatmeal frittata at Hugo’s in West Hollywood.

It’s the city of dreams — unless you live there and have to drive the 405 (of course, you could always just go Sunset to Beverly Glenn and take it over the hill).

And he proves his love for La La Land in his band 30 Seconds to Mars’ new video, “City of Angels.”

More like a documentary with musical interludes, Leto, who directs the 11½-minute video, points the camera on the famous, not-so-famous and infamous personalities asking them about one of the most loved and most reviled cities in the U.S.

Kanye West begins our docu-musical with his list that is quintessential LA — pools, James Dean, Walt Disney, gangs, Michael Jackson, Marilyn Monroe and Superman are among his list.

And then we meet Superman — or at least Christopher Lloyd Dennis, the man who dresses as Superman and will let you take your picture with him in front of TCL Chinese Theatre, formerly Mann’s Chinese Theatre — for a price of course.

Superman calls LA the “land of the stars.”

“I’ve disappointed myself the most in my life,” LiLo says.

Corey Feldman talks about the pressure he had as a young kid to provide for his family as a child star.

Along with superman, we meet a very sad Holly Beavon as Marilyn Monroe and Jovan Rameau, a Haitian refugee-turned Michael Jackson impersonator on Hollywood Boulevard.

“I’m just a copycat, man. I’m just nothing. And it kills me,” Rameau says.

But in the end, this is clearly the band’s love letter to LA. Jared Leto was the perfect Angelino as he directed, performed, produced, edited and was interviewed in the video.

The actor looks into the camera and says, “As I got older I realized that if I wanted to make all of my creative dreams come true, then I had to go west,” before rocker Leto screams, “I am home.”

“City of Angels” is from 30 Seconds to Mars’ latest album Love, Lust, Faith and Dreams, which is out now.

Are you an LA person or a NYC person? What to you think of the “City of Angels?” Let us know in the comments below.