Seventeen-year-old Lorde isn’t shy about speaking her opinion about her fellow singers. But Selena Gomez is not happy with her depiction of her, and has a few words to say about it. 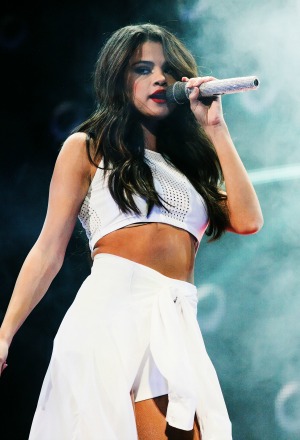 Lorde is brand new to the national music scene, but is already not afraid of sharing her opinion. And one of the singer’s recent targets is Selena Gomez.

“I’m a feminist and the theme of her song is, ‘When you’re ready come and get it from me,'” Lorde said earlier this year of Gomez’s song “Come and Get It”. “I’m sick of women being portrayed this way.”

But Gomez is not OK with Lorde talking about her, and told Flaunt magazine she disagrees with what Lorde had to say. She explained the 17-year-old is missing the point of what feminism is all about.

“That’s not feminism. [Lorde is] not supporting other women,” Gomez said. “That’s my honest opinion, that’s what I would say to her if I saw her. I actually covered her song in all of my shows that I’ve done so far. I’m not sure if I’m going to continue that.”

Lorde later tried to explain herself, but didn’t actually say her feelings about the song have changed.

“I have pretty strong morals and opinions being in pop music, and I can’t help but express those, which I think people appreciate,” she explained.

Lorde isn’t the only one who has criticized the song’s lyrics, whose chorus says, “If you’re ready come and get it.” For her part, Gomez has done what she can to be a good role model for girls.

The 21-year-old isn’t the only singer Lorde has shared her opinions about this year. She told Metro Magazine she thinks Taylor Swift is bad for the youth of the world.

“Taylor Swift is so flawless, and so unattainable, and I don’t think it’s breeding anything good in young girls,” she said.

But she later backtracked and said what she said was taken out of context. She did, however, have some choice words for Britney Spears and Amy Winehouse, and didn’t try to explain that one away.

“I’ll never go off the rails like Britney, or do an Amy, because my upbringing was so normal,” she told the Sun. “I can’t touch alcohol at my age and I’m not sure I even want to when I’m older.”

The teenage singer has a bright future in the industry, but is obviously not too worried about making friends.