Well, that wasn’t boring! So much happened on tonight’s episode of The Vampire Diaries. How many doppelgangers can one show have? 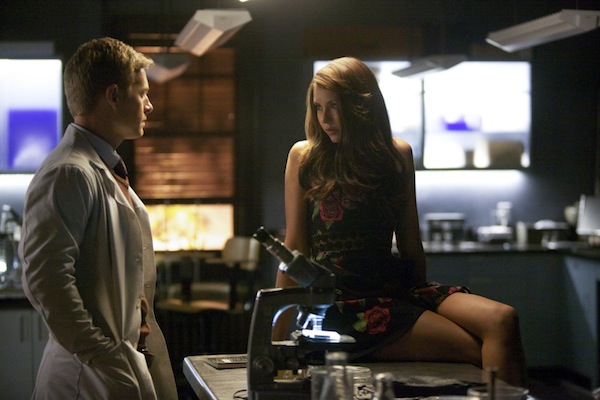 Tonight’s episode of The Vampire Diaries had so many shocking moments, we kept thinking the episode was ending with the final cliffhanger. Instead, the hits kept on coming.

The games begin, I mean, continue

Let’s just say, Qetsiyah is the puppet master, and she’s been playing this show for over 2,000 years. She’s had a lot of time to weave some really clever ploys. Too bad her crazy gets in the way.

She winds up stuck in her own cabin with Stefan (Paul Wesley) until sundown, unable to kill Silas like she wanted. It doesn’t sound too bad, actually. She does have a thing for Stefan, after all. She could just kill Silas once the spell is broken. Either way, the guy wants to die, right?

Instead of accepting defeat, Qetsiyah lures Elena (Nina Dobrev) to the house and traps her inside as well. Then she calls Damon (Ian Somerhalder) and tells him he has to kill Silas by the end of the day otherwise she’ll kill Elena.

Good thing Stefan’s good instincts take over. He stabs Qetsiyah before she can kill Elena, and the two run from the house.

OK, I love the Bonnie/Jeremy relationship, but the two of them made me wanna gag tonight. Not good.

First, Jeremy was all full of doe-eyed hope that they were going to bring Bonnie back from the dead. She had her doubts, and then Jeremy came out with the brilliant line, “If you believe it’ll work and I believe it’ll work, then it’ll work.”

And then he makes her say, “It will work.”

All they needed were some red ruby slippers to tap together, and Bonnie would have been home free. Too bad the plan doesn’t work. At all.

Katherine and Caroline have some girly time

It’s blood bags and compulsion instead of facials and pedicures.

While all the nonsense with Qetsiyah and Silas was happening, the show needed something for Caroline (Candice Accola) and Katherine to do. So why not pair the two together by making Katherine desperate enough to crash at Caroline’s place?

In exchange, Katherine agrees to help Caroline figure out what’s up with the mysterious Dr. Maxfield. They discover the secret society at the school is called Augustine. They were going to ask Elena to join until they began suspecting her of being a vampire. Good thing Katherine’s around to fix that problem.

The girls discover even more mysteries within the society. It appears the group has a vampire of their own, which they refer to as the Augustine Vampire. That’s the vampire that killed Megan. Identity unknown as of now.

It’s a game of person, place or thing

Now that Silas is human, he, Jeremy and Damon all head off to find the anchor so Silas can die and Bonnie can come back to life. Problem is, the anchor could be anything. Luckily, they know its location. All they have to do is dig through the pile of boxes to find something that looks about right then destroy it.

Or not destroy it. Kill it. Since the anchor is a person. Surprise! Silas’ long lost love has been alive all this time. Amara is the anchor.

Silas finds her first and gives her blood to revive her. He thinks it’s going to be all love and butterflies. Amara has other ideas. She drains Silas when she discovers he’s the cure. She tells him she can’t stand to live another day. There’s no shortage of crazy or Nina Dobrev on this show, we’ll say that.

Damon finds Amara and decides to take her back to the Salvatore house. Amara isn’t too happy about the doppelganger overpopulation either. She screams when she sees Elena.

One other thing to note, Qetsiyah doesn’t let Stefan off the hook for stabbing her so easily. As penance, Qetsiyah returns his memories, crippling him with his painful past. Poor guy just can’t catch a break!