Ariana Grande has a very good ghost story! The young actress recently revealed that she had a very terrifying supernatural encounter with three demons. 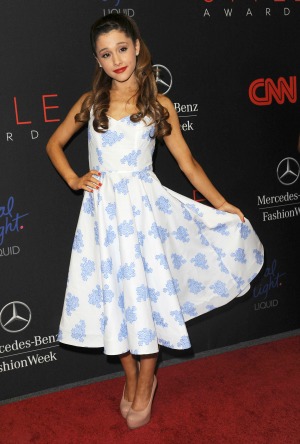 Ariana Grande recently admitted to having a very creepy encounter when she visited Kansas City and reportedly had a run-in with three demons.

The Victorious star was very excited to experience something supernatural and decided to visit two haunted houses during her trip to Kansas City. Her experience left her with a ghost story that will leave you shaking.

Grande revealed her very intense experience to Complex magazine, saying, “We went to this haunted castle and were so excited. The next night we wanted to go to Stull Cemetery, which is known as one of the seven gates to hell on earth. The pope won’t fly over it.

“I felt this sick, overwhelming feeling of negativity over the whole car and we smelled sulphur, which is the sign of a demon… I was like, ‘This is scary, let’s leave.'”

“I rolled down the window before we left and said, ‘We apologize. We didn’t mean to disrupt your peace.’ Then I took a picture and there are three super distinct faces in the picture — they’re the faces of textbook demons.”

The 20-year-old actress’ experience sounds truly terrifying and, she apparently posted an image of the faces on Instagram before having to remove it, as she felt that strange things were happening to her.

“I deleted [the picture]. The next day I tried to send the picture to my manager and it said, ‘This file can’t be sent, it’s 666 megabytes.’ I’m not kidding. I used to have a folder called ‘Demons’ that had pictures with all the screencaps in it, but then weird things started happening to me so I deleted it.”

Um what? Very creepy stuff… Grande is not the only celeb to have admitted to having a creepy supernatural encounter, as she joins many others including Rose Byrne — who claims she had a supernatural scare with an ex-boyfriend during a stay on actor Bryan Brown’s farm.

At least the “Almost Is Never Enough” singer gets to snuggle up to her boyfriend, The Wanted‘s Nathan Sykes, when she is scared. Lucky girl!