The CMA Awards highlighted the vast amounts of talent in the world of country music. There were so many huge hits, the performances almost all didn’t fit into one show. 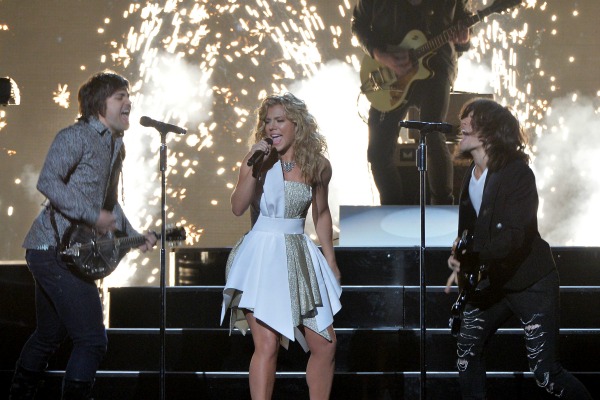 The 2013 CMA Awards focused on the music, and the biggest names in the industry performed at the show. Although hosts Carrie Underwood and Brad Paisley carried the show with their mix of personality, comedy and music, the music stole the show.

Luke Bryan kicked off the show with a high energy performance of “That’s My Kind of Night.” Bryan offered the perfect way to start the show: a short-but-sweet anthem for the world of country music.

Hosts Underwood and Paisley may win the award for best performers of the night. Their hosting duties included a song every few minutes, and the highlight may have been their quacking debuts. The hosts did their best to combine Robin Thicke‘s “Blurred Lines” with the cast of Duck Dynasty.

Jason Aldean performed his song “Night Train” and proved that the CMA Awards are really about the music. Although the performance took place inside a train car with a video in the background, it was really a stripped down version with no special effects. His song led into Kacey Musgraves‘ performance of “Follow Your Arrow.” Both songs set the stage for the night, and showed that award shows don’t need to be about shock value, but instead should focus on the art — in this case, the music.

Little Big Town may have had one of the best performances of the night, because it also focused on the music. The four members of the band were on a small stage in the middle of the audience, with a banjo, a guitar and four microphones

The show was performance heavy, and others who performed included Lady Antebellum, Eric Church, The Band Perry, Underwood and even the Foo Fighters‘ Dave Grohl joining the Zac Brown Band.

Miranda Lambert and Keith Urban performed, and while it was one of the more electric performances of the night, the song deserved it. Blake Shelton was in the audience singing the whole time, and Paisley ended the performance by saying, “Everyone please return to your own spouses now.”

Taylor Swift performed her song “Red” with Vince Gill and Alison Krauss. The crowd cheered when both Krauss and Gill began to sing. Although it was announced they would be singing together, it sounds like everyone was surprised they only sang a T-Swift song.

The CMAs are cooler than you think: CMA fun facts >>

Big winners Florida Georgia Line took the stage after winning numerous awards at the show, performing their song “Round Here.” The band went all out for their performance, and were surrounded by fans singing along to every word.

Hunter Hayes and Jason Mraz sang which led into giving away the award for New Artist of the Year (which went to Musgraves). The song was one of the more non-country sounding songs, but was upbeat and seemed to lighten up the crowd.

Alan Jackson and George Strait took the stage later to honor country music legend George Jones, and brought the crowd back to where country music came from. The older and younger generations at the CMA Awards have a bond in country music, and that bond was clear during Wednesday night’s award show.