Brad Paisley and Carrie Underwood are hosting pros by now, but they still did all they could to make the CMA Awards the most entertaining award show of the year. 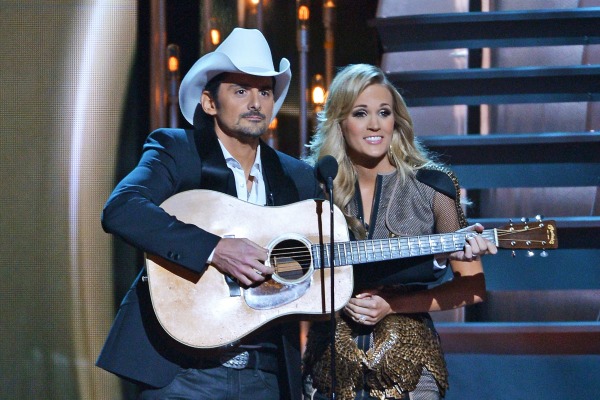 Carrie Underwood and Brad Paisley prove that you can’t have too much of a good thing. The hosts were invited back for their sixth year and were as popular as ever.

The show started with Underwood and Paisley singing “Why Can’t We Be Friends” — talking about the different musicians in feuds. They then had Kellie Pickler hand out “feuding assignments” for different musicians, including Kelly Clarkson vs. Reba McEntire and Kenny Rogers vs. Brad Paisley.

The pair took a couple shots at Miley Cyrus, thanking Taylor Swift, on behalf of their industry, for not “humping a teddy bear” or twerking on Beetlejuice (Paisley came out later in a Beetlejuice/Robin Thicke-esque black and white striped suit).

The pair were their usual singing selves, and launched into a version of Robin Thicke’s “Blurred Lines” directed toward the cast of Duck Dynasty (yes, there was some quacking and twerking involved).

Underwood (again) had quite a few wardrobe changes throughout the night, but as always, looked fabulous in each of them. The hosts did what good hosts do, and didn’t steal the show. They were pleasant and fun to watch when they were needed, but let the music speak for itself, which was the theme of the night. With performances from nearly every big name in the world of country music, the show was focused on the music only. Underwood and Paisley seemed to understand their place and let the live music rule the night.

Underwood and Paisley both left their hosting duties for a few minutes at different points in the night to perform on the show.

The CMA Awards have a good thing, and they know it. Underwood and Paisley are both smart, funny and, most importantly, talented. They have an amazing chemistry that makes you wish the show went on longer, which is not something you can say about all award shows. Chances are they’ll be back next year.