Lady Gaga has always been an out-of-this-world artist, but she’s set to take it one step further when she sings in outer space. 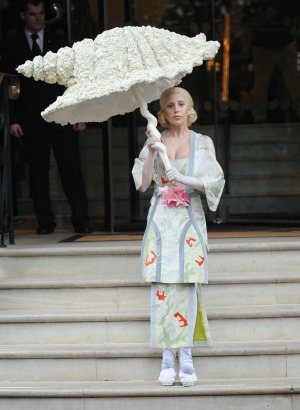 Lady Gaga is going to be the first lady of outer space. While that news might seem out of this world, it’s true according to Us Weekly.

The 27-year-old pop star is going to rocket on the Virgin Galactic ship about six months after the first commercial flight launches. Not only will Gaga be a passenger, she’ll also sing one track while in orbit as a part of the Zero G Colony high-tech music festival in New Mexico.

The three-day festival will take place at Spaceport America and the stunt will put her in the history books as the first artist to perform in space. It won’t be easy to pull it off, either. Like an athlete, she must do additional training.

A source told the entertainment site, “She has to do a month of vocal training because of the atmosphere.”

Going into space also requires a few other precautions. The insider shared, “Gaga has taken out a ridiculous life insurance policy!”

Her entourage will also be joining her on the flight to make sure she looks her glamorous self while performing. Everyone has plenty of time to prepare for this big adventure because the festival isn’t until 2015.

The Grammy winner will blasting off into outer space on the final day of the festival, but the Gaga insider promised that it will be “like nothing the world has seen before.”

Lady Gaga certainly knows how to keep her career from getting boring.