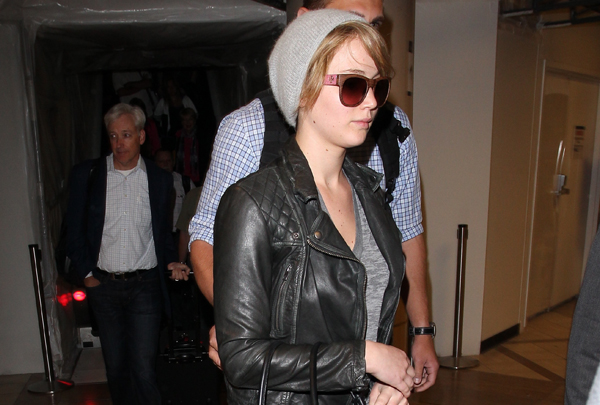 Another star goes short! Jennifer Lawrence joined Kristin Chenoweth, Jennifer Aniston, Jennifer Hudson and many others in the Hollywood short-hair rage, debuting her short pixie cut in a Facebook photo on Wednesday.

The Hunger Games star posted a photo that clearly showed her very short — and blonder — hair as she was on her way to a fan event along with co-stars Josh Hutcherson and Liam Hemsworth. “Headed up north for #GLOBALFANDAY with The Hunger Games Catching Fire cast. Follow this page all day for updates!” she wrote along with the picture.

An insider told Us Weekly that Lawrence’s new cut was done by stylist Riawna Capri at West Hollywood’s Nine Zero One Salon a few weeks ago. Capri cut and also dyed the actress’ hair, getting her color back to her lighter shade.

Jennifer Lawrence traumatized after being branded too “fat” >>

Another source described the cut as “kind of a punk pixie cut” and added it has some longer pieces on the side, but is short all over everywhere else. Apparently, Lawrence has been wearing long, black-haired wigs to film the third installment of The Hunger Games: Mockingjay — Part 1, which has been shooting in Atlanta.

Before debuting her new cut, Lawrence most recently hid her short hair at the LAX airport under a gray slouchy beanie cap. The Global Fan Day event was the first time she appeared in public showing her new hairstyle.

Lawrence’s decision to cut her hair came as a complete surprise and it’s not known what inspired her to change her hair so drastically right before The Hunger Games press tour. But the new do will keep her in the spotlight, especially at the movie premiere’s red carpet where she’ll undoubtedly wow fans all over again.