From their favorite festivals to performing on The Carrie Diaries to the transference of energy from band to fans and back again, American Authors has something to say about everything — and it was pretty funny. 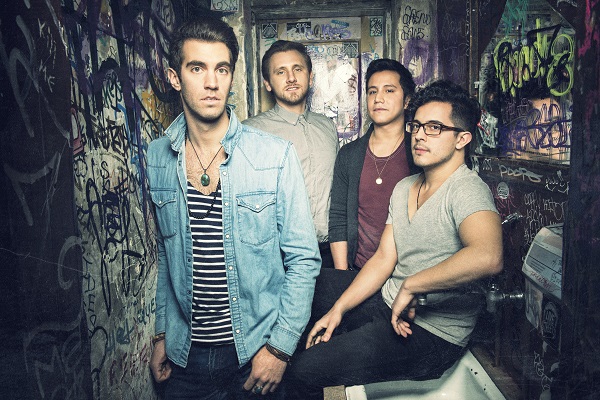 SheKnows recently took a hot second to speak with American Authors after their performance at Live in the Vineyard, and we covered a lot of ground in very little time. And throughout our time, they kept us in stitches. We’re excited to share our favorite moments of chatting with the band.

Over the weekend, American Authors took the stage at Live in the Vineyard, a twice-annual event that combines good wine, good food and great music. This fall, the festival featured bands like Jonas Brothers, James Blunt, Atlas Genius and, of course, our new friends American Authors. Did they enjoy the experience?

“A lot of fun! It was great! We’ve never performed in Napa before, and even though we didn’t have much time to see the vineyards or anything it was still a lot of fun,” they told us. “The crowd was great and the whole thing was organized and done very well. So, overall a very positive experience and a lot of wine being consumed. And! Fresh olive oil and the bread was really nice, too.”

Live in the Vineyard is a pretty unique festival experience. It’s something we’d definitely love to check out, especially after knowing American Authors had such an awesome time. But what’s next? What other festivals would they love to play?

“We’d like to play them all,” the guys shared. “We love playing festivals. You know, we did Lollapalooza and a few other ones this summer but, you know, I think it’ll always be fun to do Coachella or Bonnaroo and then Glastonbury.”

Their Instagram is littered with tons of videos. The band performs everywhere from large venues to festivals. Sometimes they just set up on a street and jam out. What’s their favorite place to perform? They told us they prefer the bigger stages, where they have more room to run around and have fun. The size of the stage doesn’t matter as much as making sure to connect with their audience, though.

“I think the thing we like most is just connecting with our fans and kind of the exchange of personal energy that’s happening,” they said. “We feed off the audience’s energy and, you know, hopefully they feed off ours. And it’s just kind of a consistent back and forth with that. It’s about those moments where you can actually look at someone off-stage and see them singing along with all their heart. And you just know they’re in it, you’re in it, we’re all in it together, in a way.”

The band reached a very big milestone recently when they were asked to perform on The CW’s The Carrie Diaries. In a recent episode, Carrie Bradshaw and her friends head to a music festival in New York. The show’s EPs asked American Authors to come out, dress up like they were in 1985 and perform a song. These are guys’ guys, though. So, were they excited?

“I don’t think any of us had ever seen the show before,” the boys readily admitted. “I don’t think anyone knew how big of a deal it was until my girlfriend or someone’s girlfriend was just like, ‘Oh my God! I watch that show all the time.’ And it was like, ‘Oh! That’s amazing! Somebody’s girlfriend somewhere said, ‘That was kinda cool.'”

We brought out their goofy side later when we asked them what sets them apart from all the other bands on the scene. Their answer?

“Our dashing good looks and our winning comments,” they teased, adding, “Yeah, we’re all really cute.”

We managed to get a serious answer from them, too, though.

“You know, we have really high energy, whether it’s writing and recording the music that we release or our live shows,” they said. “Rather than just making fans, we try to be personable with everyone that comes out to the show and meet everyone and really make it a fun time, and a time to remember.”

For more interviews with your favorite bands, sign up for our newsletter >>

The guys’ band is a tight, silly unit, despite coming from various corners of the United States. With hometowns so far apart, how did they meet?

“eHarmony.com,” joked one of the guys.

(Real answer: They all met in school at the Berklee College of Music in Boston.)

Their final answer gave us the most laughs, though. When asked to fill in the blank for “If you love _____, then you’ll love American Authors,” one answer came flying out quickly and it’s the one that will stick.

The dashing and hysterical American Authors debut EP is out now and their first full-length record is expected early next year. SheKnows highly recommends you give these boys a listen.