At just 16 years old Lorde has already shot to superstardom, but the young singer insists she will never let fame or the music industry change who she is. 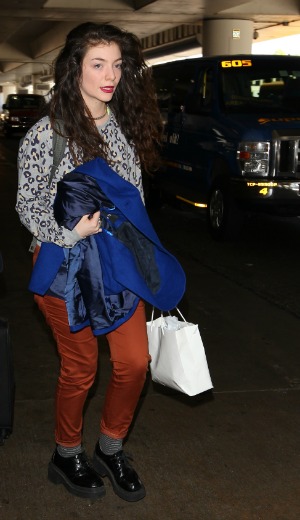 Ella Yelich-O’Connor, better known by her stage name Lorde, shot to fame for her massive hit single “Royals,” and the young star has some harsh words for singers who have fallen off the rails.

“The Love Club” singer insists that unlike teen pop stars before her, she will not drink or lose control.

Lorde named singer Britney Spears, who suffered a very public meltdown in 2008 and, Amy Winehouse who struggled with addiction problems, which ultimately led to her tragic death in 2011.

The 16-year-old star told The Sun newspaper, “I’ll never go off the rails like Britney, or do an Amy, because my upbringing was so normal. I can’t touch alcohol at my age and I’m not sure I even want to when I’m older.”

In an industry that is becoming so overly sexualized it is good that young fans still have a sensible role model to look up to. Lorde firmly believes fame will not change who she is and wants to remain humble throughout her career.

“Six months ago, no one knew who I was and now fans chase my car. But I’m never going to change or let fame get the better of me,” she said.

The New Zealand native is also not a fan of the Hollywood lifestyle, saying, “I don’t think I could ever live in Los Angeles. It does something to your soul.”

“The place really infects people — if I stay there for too long I start being a freak. All this is just fantasy land as Lorde.”

She is quickly becoming one of the hottest talents in town, and she is not afraid to speak out about who and what she doesn’t like.

Tell us, what do you think of Lorde’s outlook on the music industry?