Don’t ever make Tom Cruise angry. Two tabloid magazines were hit with a $50 million lawsuit after they wrote about Cruise’s alleged lack of parenting skills with Suri. 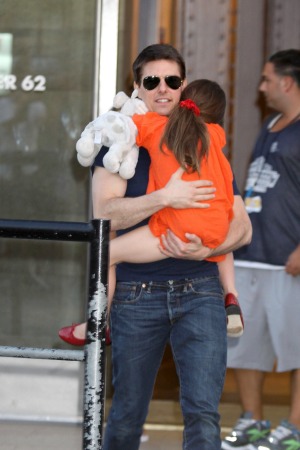 Don’t ever mess with Tom Cruise, especially when it comes to his daughter Suri. The actor is fighting mad that a publication claimed that the Mission Impossible star “abandoned” his child with third wife Katie Holmes.

Instead of taking the news lying down, Cruise has filed a $50 million lawsuit against the publisher of two tabloid magazines, Life & Style and In Touch. Their cover stories reported that he was an absentee father after divorcing Holmes in June 2012.

Nicole Kidman on Cruise marriage: He wasn’t her “great love” >>

According to the court documents obtained by TMZ, Cruise stated, “I have in no way cut Suri out of my life — whether physically, emotionally, financially or otherwise.”

To prove his point, the star referred to specific instances when he was with his youngest daughter.

He said, “…even during the times when I was working overseas and was not able to see Suri in person, we were (and continue to be) extremely close.”

While he didn’t reference his former wife by name in the document, he does cite that he has plenty of proof that he was in touch with his 7-year-old child.

“As my numerous emails with Suri’s mother during this time period demonstrate, I was a constant presence in Suri’s life,” shared Cruise.

The bottom line is that even though her parents are divorced, Suri is being raised by both parents. Of course, the Oblivion actor emphasized that his little girl is doing OK with her current parental situation.

He said, “While I’m sure my daughter misses me when I am not with her (as I miss her), she is a very happy child, and we have a wonderful relationship and cheerful phone calls.”

The In Touch headline ran with the title, “Abandoned by Daddy,” shortly after the couple’s divorce was finalized.

No wonder Cruise was mad.