Skye is still on Ward’s unpopular list when the team pulls a case that looks like murder, but ends up something completely different and puts all their lives at risk. 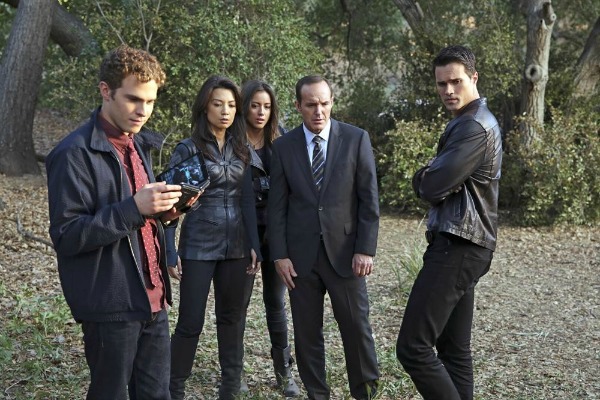 I know that a lot of people are giving this show grief, but I have to say that I’m still on board with it. Is it my favorite show of all time? No, not quite. But I also know that sometimes it takes a few episodes for a new series to find its stride and I’m willing to follow this one for a little while longer.

One thing I have been waiting for is a really emotional episode, something that really grabs at my heartstrings. I’m talking like the “Out of Gas” episode in Firefly — an episode that takes one or more of the characters and really tests their limit. Agents of S.H.I.E.L.D hasn’t gotten there yet, but this episode did bring out some emotions for some of the characters and I appreciated that.

First there was Coulson and his whole “I died therefore I must be different” attitude. He had himself checked out because he was certain that there must be something wrong with him. While his tests came out perfect, I have a feeling that he’s not completely wrong about those suspicions of his. He may be fine physically, but who’s to say that there’s not something else going on with him. His inner struggle led to some great moments in this episode, including the one where he reassured their victim that death was nothing to fear, as well as the final conversation he had with May. Like he said at the end of the episode, he’s not exactly the same guy he was in the film and personally, I’m liking this new version.

The other great stuff that happened in this episode was between FitzSimmons. So far they’ve really only been the butt of a few jokes and the comedy relief. It was nice to see their story delve into something a tad more serious. Not only did Simmons contracting the virus bring everything to a frightening place, it also took FitzSimmons themselves to some new levels in their relationship. I never got a romantic vibe off of them, but I thought there might have been a hint of that in this one. Though it was hard to tell, since it also appeared that Fitz liked Skye, too.

Simmons telling Coulson he was in great shape for a man of his age. Oops.

“This guy makes Captain America look like ‘The Dude.'”

May interrogating a boy scout.

FitzSimmons fighting over the body in the lab.

Coulson talking to Diaz about his own experiences with death.

Coulson quietly walking out of the room after he saw the tool floating behind Simmons.

FitzSimmons sitting back to back through the glass.

“There’s only one person on this place capable of finding a solution for this and I’m willing to bet my life that she will.”

Ward admitting that he felt helpless because he couldn’t protect them from something he couldn’t see or understand.

FitzSimmons fighting through the glass and then coming up with the idea for a cure.

Fitz walking into the lab and declaring that they were going to do what they always do: Fix the problem together.

Coulson reading Simmons the Riot Act for making them deal with the Moroccan office.

Ward telling Simmons what she did was incredibly brave.

“Don’t worry, you don’t have to start calling me Iron Man.”
“Wasn’t planning on it.”

May asking Coulson to unbutton his shirt and pointing out that no matter how long it was, there was no way he could come out of that and not be changed.

“You feel different because you are different.”

Simmons telling Fitz that he was the hero for giving her hope when she had none.

Aw, FitzSimmons kiss. Too cute! Wait, why did that get serious all of a sudden?

“That doesn’t sound like the Phil Coulson I used to know.”
“No, I suppose it doesn’t, get used to it.”