Christopher Gorham teases the latest episode of Covert Affairs, which he directed, plus talks about how much work went into getting the opportunity to direct on the series. 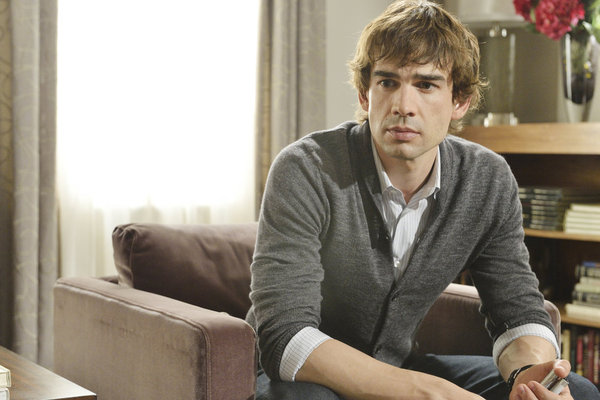 So far on this season of Covert Affairs, Auggie and Annie have been torn apart multiple times. Currently, their romance has been shattered once again, thanks to Annie having to fake her own death to catch major bad guy Henry Wilcox.

Christopher Gorham, who plays Auggie Anderson on the show, directs this week’s episode. SheKnows got the chance to talk exclusively to Gorham about what it was like to direct the episode, when he was bit by the directing bug, the challenges of directing a show like Covert Affairs and much more.

SheKnows: What can you tease about the episode that you directed?

Christopher Gorham: The episode opens with Annie and Auggie being face-to-face for the first time since she went dark. Within the world of the show, it’s been over three months and they’ve both been through a lot and I think it’s been very lonely for both of them.

That being said, the reunion doesn’t play out all the way that either one of them would’ve hoped it would have. [But] it’s a great scene, it’s one of my favorite scenes in the episode. That’s how it starts and then the hunt for Henry continues.

We’ve got some really great stuff that’s happening: There’s a kidnapping in the episode, there’s a car crash, Annie is really forced to change tactics midstream, which is fun to see. Auggie’s kind of pushed to his limit and ends up making a dangerously impulsive decision. [Also], Barber’s on a health food kick, which is hilarious to watch. So there’s a lot. There’s a lot.

SK: How did you end up directing this particular episode, was it based on scheduling or did you get to choose this one?

CG: No, it’s schedule-based. I was actually originally boarded to direct the sixth episode of the season, but my production was so busy that I had no time to prep because I was shooting all the time then. So we ended up swapping it for this episode.

SK: When were you hit with the directing bug?

CG: You know, I think it’s something that’s been present but dormant in me for a long time. I took a directing class in high school. But I think [that] the longer that I’ve worked the more I felt like I could do it, and the desire to do it got stronger and stronger.

So what kind of started me down the path to actually directing was a dinner I had with Chris Ord and Matt Corman, the creators of Covert Affairs, during the pilot. I really felt like this show was going to go and be on the air for a long time. So I took them out to dinner and I said “Listen, I wanted to bring you guys out to dinner tonight because I wanted to let you know that I really want to direct and I would love to direct on this show at some point. Not in the first season, maybe not even in the second season, but whenever you guys are comfortable, and if you need to see anything from me in the interim let me know what it is and I’ll do it and I’ll jump through whatever hoops you want me to jump through in order to get that opportunity.”

So, little by little, things started to come up. I directed a few shorts for Funny or Die, I started shadowing directors on other shows. Then I came up with a promotional opportunity for the show when we were shooting in Istanbul: To shoot behind-the-scenes photos and video — which they ended up creating a website for and they put all that stuff up on the web and they were really happy with it and excited by it.

They then had pictures to look at so they could get an idea of what my visual eye is like. Then at the end of that season, the network hired me separately from the show, to go on the big European trip as the videographer and behind-the-scenes photographer. They created another website for that stuff and then the first directing opportunity I got was doing the webisodes in Season 3, which we shot in Barcelona and Toronto. Then, at the end of Season 3, I directed my first episode for the show and it went really well, so they hired me again this year. It was great.

SK: I hadn’t realized that you pitched it all way from day one, that’s fantastic.

CG: Yeah, I wanted to make sure to stoke that fire as early as possible. Because it’s a multi-million dollar television show. Each episode costs millions of dollars to make and they’re not gonna just hand it over to somebody because they’re on the show. They take these choices seriously and I wanted to make sure that everybody knew that I took it very seriously as well.

SK: You directed an episode last season, was it harder or easier directing again this season?

I took the lessons from last year and I think applied them this time, which made some things a little easier as far as just really trusting myself and trusting my instincts and following through and pushing for my choice and my vision when it was necessary and then being flexible when that was necessary.

SK: How is it different shooting an episode as an actor than as a director?

CG: It’s much easier to be an actor. [Laughs] When you’re just an actor, you just show up and [just] play the scene. All you have to think about is what’s going on in that scene. As a director you have a lot more to worry about and everyone is coming to you with their questions, but that’s also the really amazingly rewarding thing about it. As an actor you really only have the opportunity to shape the scenes that you’re in, whereas as the director you shape how the entire story is told and it’s just a blast.

Kick-butt shows to watch this summer >>

SK: What is your favorite part about directing?

CG: There [are] lots of favorite parts, but overall it’s being able to tell the story from start to finish. Not just telling the emotional story of the character you’re playing, but showing the emotional arcs and showing all the action beats and really guiding the audience through this story in the way that you want them to experience it, which is different than telling them how to feel about it. I don’t want the audience to always know how I want them to feel about a scene or about the episode, I don’t want them to know necessarily how I feel about it. I want them to have their own experience.

SK: It feels like Auggie has changed a lot as a character from the first season. What has it been like for you as an actor to explore the different sides of him?

CG: I tell you, it’s one of the real blessings of this show — and I think it’s a combination of USA Network and the creators and writers of our show — is that they’ve really allowed the show and these characters to evolve. And it’s all directed by the experiences that they’ve been through. In four years, going through what these characters have gone through, I don’t think anyone would be the same. Whether they’ve changed for the better or for the worse I think is always subjective, but nobody stays the same — especially when they’re going through stuff like these people go through on a day-to-day basis. I think this show has really mirrored that. As Annie has grown up as an operative and gone from this wide-eyed, bushy-tailed girl who is excited and nervous about everything to this really confident, serious full-grown spy. I think this show has evolved with her and I think it’s a credit to our team that they’ve allowed it to.