Very big congratulations are in order for David Arquette and his girlfriend, Christina McLarty, because the couple are expecting their first child together… 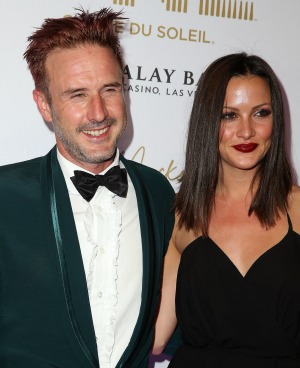 David Arquette is going to have to quickly clean up his image and avoid repeating history with his bizarre and drunken behavior because things in his personal life just got a whole lot more serious.

If sources are correct, then the Scream actor is going to be a dad for a second time!

Arquette already has nine-year-old daughter Coco, who he shares with his ex-wife Courteney Cox, and now he may have a baby on the way with the love of his life, girlfriend Christina McLarty.

Arquette previously gushed about his girlfriend when he appeared on Andy Cohen’s Watch What Happens Live, saying, “I’m madly in love with her and she’s the love of my life. Absolutely.”

Sources revealed to TMZ that the Entertainment Tonight host is expecting her first child with her 42-year-old actor beau! In fact it has been reported that the brunette beauty is already four months pregnant.

The source also revealed that the couple were not ready to break the news but that, “it came as a surprise. They are excited and happy even though this was unexpected.”

Just last month McLarty adamantly denied that she and Arquette were engaged, telling Us Weekly, “We are totally happy and together in love, but we are not engaged.”

“It’s just a rumor that got out of control.”

Perhaps when the baby comes the pair will rethink this decision and a possible proposal will be in the cards?

Congratulations to the very happy couple!