Cut Copy has a new album, Free Your Mind, and it’s stellar. Add to it the foursome’s quirky humor and we’re hooked. You should be, too! 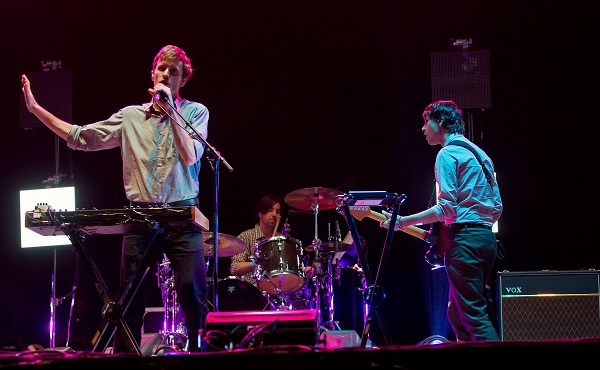 Cut Copy has been around for more than a decade now, but unless you shy away from Top 40 Radio or the stuff they play on most rock stations, you’ve probably not spent much time listening to their music. The Australian quartet has fared marvelously in their homeland and just okay in America. They’ve released a brand new album, though, and we’re hoping this is the one that pulls out an even broader American audience. There’s just so much to love about them.

Synthpop is such a despicable descriptor. It seems so broad and nondescript and yet it fits Cut Copy perfectly. To refer to their music as rock would imply a loudness and fuzziness that doesn’t exist for Cut Copy. Anything else might lend itself to making them sound soft. Cut Copy is a party on a round silver (or black) disc. They are a one-night-only dance workout each time they arrive in a new city for their next gig.

Their newest album, Free Your Mind, might be their most “new wave” yet. The album’s namesake features sassy R&B samples, adding a funky overtone to the beginning of the record. The album carries on with laser gun zips and zaps and fantastically ’80s-shadowed and auto-tuned vocals. There are even some bird tweets mixed in! Their beats will inevitably find your feet shuffling across the floor and your head (complete with a grin) bobbing happily along.

(And, yes. That’s Alexander Skarsgård in their music video.)

Cut Copy doesn’t just make music they hope will make listeners dance, they make music that makes them dance. That’s evident from the way they often find themselves dancing along to their music on-stage. During a Reddit AMA with the band, one fan even lovingly poked fun at vocalist Dan Whitford about his on-stage often-twitching hand gestures. Does he practice those magnificently diva-like moves?

“I spend 3 hours a day practicing my hand movements. I am currently writing a book on the health benefits of this exercise. Working title ‘healing arms of dan,'” Whitford wrote.

Yeah… they’re pretty funny guys, too. Despite their half-million followers on Twitter, they’re also incredibly down-to-earth and available to fans. During their hours-long Reddit session, multiple fans expressed their appreciation for a quick meeting they had with the members. They even agreed to sign someone’s shirt at an upcoming show and grab coffee at a barista/fan’s cafe next time they were in town. These Aussie gents’ generosity is inspiring and just another reason why we think they deserve all the fame and love we can send their way.

For all the latest music news, sign up for our newsletter >>

Free Your Mind is available to listen to on Spotify right now. But, seriously, head to your local record store or to Cut Copy’s website and pick-up a copy soon. Great artists can’t survive without conscientious fans doing their part. See you at the next show!