Each week as we watch James Wolk light up on screen on The Crazy Ones, we see nothing but potential behind those blazing blue eyes, so we came up with some performances where we think he’d shine. 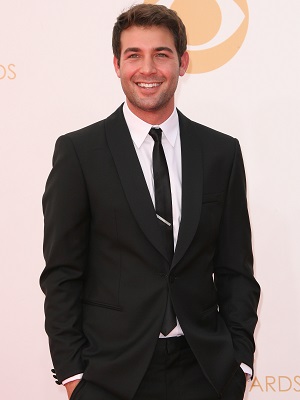 It will be an injustice if James Wolk stays on the small screen given his enormous talent, but that’s not going to preclude some of our choices for roles we’d like to see this gifted actor tackle sometime in the future.

James Wolk is stealing the show >>

Watching him on The Crazy Ones is a fun ride, but we’re planning ahead for his super-stardom, so don’t stand in our way.

We are not the first to notice the crazy resemblance Wolk has to Kyle Chandler. The marriage between Eric and Tami Taylor was so amazingly realistic that it made multiple “Best TV Couple of All Time” lists. We’d like to see where it all began and there isn’t a better man to step into Chandler’s shoes. The chance to see Wolk get romantic certainly doesn’t hurt. He gets bonus points for having starred in Lone Star with one of the series’ original players, Adrianne Palicki.

Robin Williams’ 5 best TV performances before The Crazy Ones >>

There is a production in place right now and the role that was once played by Marlon Brando is rumored to be going to Channing Tatum. Say it ain’t so! We’ve seen Wolk in action and he can sing! He can dance! He can hold his own on the big screen along side Joseph Gordon-Levitt. This is a role he was born to play.

Yes, it’s been tried before, but never seriously. We’ve already seen how well Wolk works with Sarah Michelle Gellar and we know she’s good with the supernatural — why not pair them up again as Darrin and Samantha Stevens? If they did set it in the 1960s, their natural good looks would only complement the remake.

“John Robie” — To Catch a Thief

Wolk exudes the same charisma of Cary Grant. He has the style, the wit and charm and looks debonair in a suit. Wolk would do very well as a suave, retired cat burglar who needed to get back into the game to catch someone who was copying his work. Imagine him in the finest clothes against the backdrop of the French Riviera with Scarlett Johansson in Grace Kelly’s role of Frances Stevens.

What do you think? Is there a role you love with shoes begging to be filled by the sensational James Wolk? Share your thoughts with us!