Thor star Jaimie Alexander was practically naked when she walked the red carpet for the movie’s premiere on Monday. 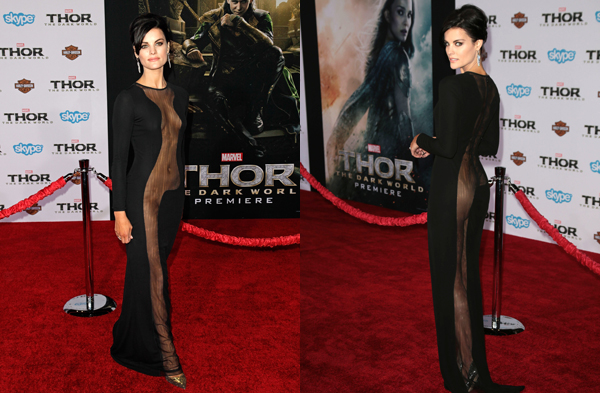 Leaving nothing to the imagination, Jaimie Alexander strutted her assets, literally, as she walked the Thor: The Dark World premiere red carpet in a cut-out dress that made her look almost naked.

Alexander’s dress was reminiscent of Gwyneth Paltrow’s Iron Man 3 premiere dress, although it showcased many more strategically placed peek-through cutouts. Not to worry, though, as even with all the exposed skin, Alexander insisted she felt very toasty in her scandalous dress.

“You know, it’s actually quite warm because it’s a long sleeve,” Alexander told People magazine at the premiere event. “I tried on a lot of dresses, and a lot of them were actually too big, or too small, or too short, or too tall, and then I saw this dress.”

Initially, after seeing a photo of the gown, Alexander said she didn’t want to wear the overly sexy contraption, because it was too “revealing.” But, once she “put it on, it was edgy, but, sort of classy at the same time.”

Explaining her perfect physique, Alexander admitted that the lifts “a lot of weights,” and grew up very athletic. “I have four brothers, and I was also on my high-school wrestling team. The boys’ team,” she said.

Well, it looks like all that male-inspired athleticism has aided Alexander in becoming a very feminine and sexy woman, who is in excellent shape. All this fitness probably helped her from suffering an epic wardrobe malfunction in that outrageous dress as well.