Courtney Stodden and Doug Hutchison are calling it quits on their May-December romance after nearly three years of marriage. What went wrong? Besides the obvious, that is. 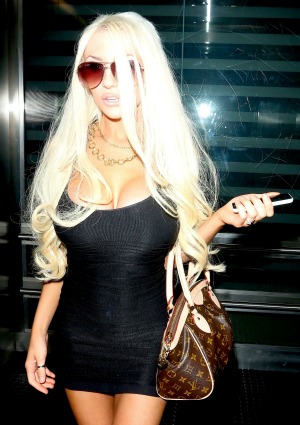 Reality stars Courtney Stodden and Doug Hutchison shocked the world with their Vegas wedding two and a half years ago when the blond bombshell was just 16 years old. Now 19, Stodden has decided it’s time to venture out on her own — and the couple has called it quits. Sort of. Mostly.

While they have filed for legal separation, Stodden and Hutchison said in a statement that they’re still living together and he’s still co-managing her career.

“After two and a half years of marriage, Courtney and Doug have decided to become legally separated,” they said. “This is a mutual and amicable decision that they’re making together. As you know, Courtney was married at a young age. Now, at 19, she’s interested in exploring life as an unmarried single young adult — with the freedom to explore her independence. Doug supports Courtney 100 percent. The two will share custody of their precious pup, Dourtney, remain living in the same house (for now) in separate bedrooms, and Doug will be co-managing Courtney’s career.”

“We love each other very much, want for each other’s happiness, and will continue being the best of friends for life.”

So what went wrong? Besides the obvious age difference, of course. Chalk it up to growing up. During her appearance on Celebrity Big Brother, Stodden revealed that she felt more independent without Hutchison around and openly flirted with fellow contestant Mario Falcone.

In fact, the realization that she could actually spread her own wings left Stodden pretty freaked out.

“He means so much more to me than this freaking house and I don’t want to leave this house feeling so strong and independent that I can’t depend on him anymore,” she confessed on the show.

“Courtney has changed so much since being in that house,” an insider told the Daily Mail. “She is more independent and just wants to have fun like any 19-year-old.”

The separation will leave Stodden with more time to focus on the obvious procedures she is fond of, leaving her face and body nearly unrecognizable from the girl we met in 2011.