Drew Barrymore has officially confirmed she is pregnant with baby No. 2, just 13 months after the birth of her daughter Olive. 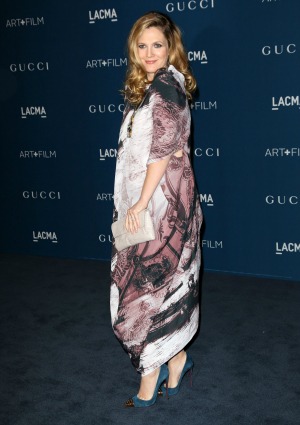 Not like we couldn’t tell by the big ol’ baby bump she was sporting on the LACMA Art+Film Gala’s red carpet over the weekend, but Drew Barrymore has officially confirmed that yes, she is definitely pregnant with baby No. 2!

While the star never publicly announced her first pregnancy, she said this time she’s spilling the beans with the hopes that the paparazzi will give her a little space.

“Last time I never commented on it and people just stalked me the entire time,” Barrymore told People magazine while promoting her Flower cosmetics line. “So yes, it’s happening, it’s true. I tried to keep it a secret for as long as possible.”

The actress has been open about her desire to give her year-old daughter Olive a sibling, and she said she is absolutely “overjoyed” to be able to do so.

“When I found out, I was overjoyed. It always feels so surreal, it’s incredible,” she gushed. “[I’m feeling] incredible, that ‘Here we go again’ feeling. And blessed. Blessed!”

“You’re so lucky to get to do it. It’s such a miracle. I just felt really lucky,” she added.

Barrymore, who herself was an only child, recently told InStyle magazine that she wanted Olive to have a brother or sister so they can keep each other company.

“I was an only child, and it was lonely,” she told InStyle this summer. “Some people love it and thrive on the independence, but I want my kids to have other kids around. Maybe two kids so they can run around life together, roll their eyes at their parents together like Rusty and Audrey Griswold from “[National Lampoon’s] Vacation.” So however that’s going to come about, it’s gonna happen!”