Oprah is unveiling her Favorite Things in the December issue of O. And this year, she is doing it in a big way. 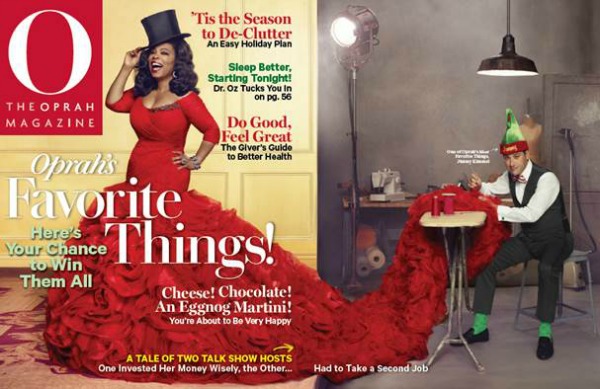 It’s officially the holiday season, and that means it’s once again time for Oprah‘s Favorite Things! The talk show queen is doing things a little differently this year and will be donning a very large, very fluffy red gown for the reveal.

Oprah’s magazine O will feature her favorite things for its December issue. A few of those things will also appear on the cover, including Jimmy Kimmel. The late-night host acts as an elf helping put together Oprah’s extravagant gown.

“Thank you Oprah for almost putting me on the cover with you!” Kimmel recently joked on his show when talking about the cover.

Oprah’s 2013 list includes 60 items that Oprah is calling, “the ultimate, ultimate list of my Favorite Things.” Although she discontinued the popular segment in 2011, she brought it back in 2012, and 12 lucky readers are being given the chance to win all 60 things on her list.

The gown is from WHITE by Vera Wang at David’s Bridal, and was made by 10 people for a total of 100 hours. According to a rep for Oprah, it comes in at 25 pounds, and used 160 total yards of fabric.

But for Oprah, who has never been shy to give, her favorite things aren’t about the things themselves, but the action of giving.

Why Jenny McCarthy is terrified of Oprah >>

“It’s not about spending tons of money. It’s not about buying the biggest gift,” she explained. “Generosity is about using whatever you have to give a gift that means something.”

For the woman who can give any gift she wants (she recently landed back atop Forbes‘ Celebrity 100 list), a gift from the heart means a lot.

Oprah’s Favorite Things issue of O will be on newsstands Nov. 12.