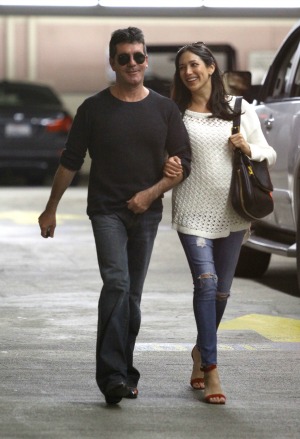 Simon Cowell has already decided on a name for his son, and who better to name your first born after than his favorite person — himself!

The 53-year-old entrepreneur is expecting his first child with socialite girlfriend Lauren Silverman and has gushed about how he is looking forward to fatherhood and, of course, naming his son.

In a recent interview with Extra presenter Terri Seymour — who also happens to be Cowell’s ex-girlfriend — the music mogul revealed he would like to continue the Simon Cowell legacy, by passing his name on to his son.

“My number one choice is Simon because I like the name,” Cowell revealed. He may sound very full of himself, but the The X Factor boss showed his emotional side when he admitted his second choice was Eric, after his late father.

The talent show judge said, “His birthday is going to be very close to my dad’s birthday,”

It is only a pity his father was not able to meet his grandson because Cowell believes he would have been “very proud.”

Cowell’s son will have also have some pretty big shoes to fill — his dad intends to teach him the tricks on the trade when he is older. The mogul confessed, “I want to teach him how to do my job as quickly as possible. I want to pass the reins over. I really would like the idea of teaching him how to run the business.”

So how will the first time dad cope with the new addition to his life? His child-rearing philosophy is actually pretty straightforward, “Be cool about it. You know, don’t worry about things too much.”

“The way me and my brother were brought up, I mean, it was kind of relaxed. There were no self-help books or any of that crazy stuff.”

We personally think Cowell will make a great father and since the news of Silverman’s pregnancy he has become a big softy. What do you think?