There’s about to be a new werewolf in town! Julie Plec shared details on Tyler’s crossover to The Originals, which promises to “shake things up.” 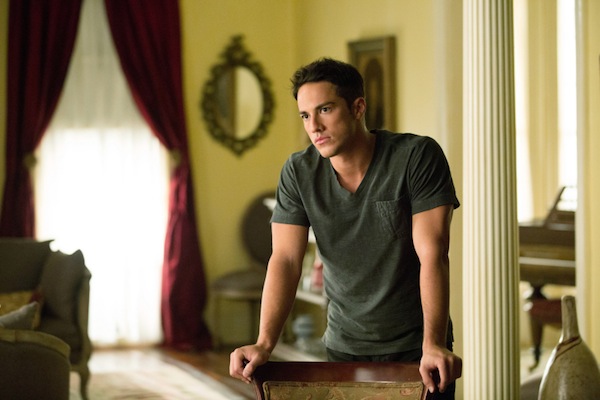 It’s official! The Vampire Diaries‘ executive producer Julie Plec shared all the details on Tyler’s switch to The Originals at a screening event Monday with reporters, saying, “The crossover is happening soon.”

And another one bites the dust. Not that we’re particularly sad to see Tyler go. He’s stomped on Caroline’s heart one too many times. But The Originals probably has more actors now from The Vampire Diaries Season 4 than The Vampires Diaries does.

If you’ll remember last week’s episode of The Vampire Diaries, Tyler (Michael Trevino) and Caroline (Candice Accola) finally broke off their relationship. Tyler said he couldn’t love Caroline more than he hated Klaus (Joseph Morgan). Ouch! Tyler then made plans to go after the vampire.

We’re guessing he’s going to add himself as another player trying to win this mafia war for power happening on The Originals. Will he be for or against Hayley (Phoebe Tonkin)? She is, after all, carrying the baby of Tyler’s worst enemy. Poor girl. I’ve lost count of how many people want to kill her baby at this point.

As reported by The Hollywood Reporter, Plec said she’s, “fairly certain,” Trevino will be joining the cast before the end of November.

Co-executive producer Michael Narducci added that Tyler’s crossover to The Originals‘ cast this month isn’t the only surprise. “There’s a lot of stuff that’s about to be introduced.”

According to Plec, Tyler’s presence in the show will further Hayley’s search for more information about her bloodline and history. Though the story line has become more and more complicated, Hayley’s original mission in New Orleans was to discover where she came from.

No word yet if Trevino will be a part of the cast as a series regular or for just a few episodes.

The Originals airs Thursdays at 8/7c on The CW.