The split between Courtney Stodden and Doug Hutchison isn’t too surprising considering that their 35-year age difference probably caught up with them. 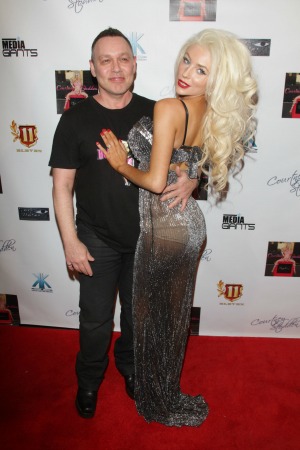 They said it wouldn’t last and it didn’t. Courtney Stodden and Doug Hutchison have separated and the actor has moved out of their Hollywood home.

The couple married when Stodden was only 16 years old and a virgin. The news sent Hollywood into shock when they walked down the aisle in 2011.

In an interview with Good Morning America after their nuptials, Hutchison talked about their unconventional marriage.

Courtney Stodden: I have a sex tape, too! >>

In reality though, the relationship creeped out much of the public. Even though the couple had the blessings of the teen’s parents, the Green Mile star’s mother stopped speaking to him. He was also dumped by his agent and manager at the time.

A mere three years later, Stodden is ready to move on. She spent some time on the reality show Celebrity Big Brother in the U.K. this summer, where she relished her newfound freedom.

The teen even threw a Halloween party last Thursday night while Hutchison seems to be the only one in mourning.

PHOTO: Courtney Stodden nude and cozy with a zombie >>

A source told Radar Online, “I’m not sure they’ll be able to recover from this. Doug’s world has been turned upside down, but for Courtney, it’s far from that. She is embracing singledom. It’s clear she has finally emerged to be able to call all the shots.”

In addition to enjoying a break from her marriage, Stodden has been surgically enhanced during the past few years. She’s almost unrecognizable from the girl who walked down the aisle with the Lost star.

As for Hutchison, it might be time for him to find someone closer to his own age.

The source summed up, “She is branching out and doing her own thing and Doug is getting left behind.”