SheKnows had a chance to talk to rocker Kevin Rudolf about his upcoming new music, performing at Napa Valley’s Live in the Vineyard and how a guy from New York City who lives in Miami went to Nashville and came home with a number one hit. 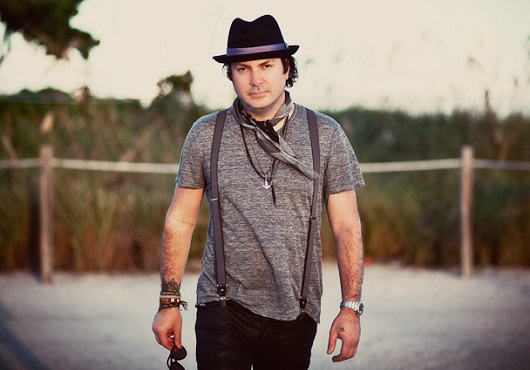 Rudolf is from New York City, his roots are as a rocker and he can play a mean electric guitar.

However, he’s signed to Cash Money Records with labelmates like Drake and Nicki Minaj. His biggest hit was the anthem “Let it Rock” featuring Cash Money’s Li’l Wayne

So perhaps he’s more of a hip-hop artist — if you don’t count that he co-wrote Keith Urban’s most recent number one hit “Little Bit of Everything.”

Why Keith Urban is our Australian Idol >>

And that’s just what Kevin Rudolf is. He’s a little bit of everything. He’s a rocker/producer/hip-hop and pop artist with some country tendencies.

But it’s all rock and roll to Rudolf.

I don’t really see much difference in anything I do, Rudolf told us. “I’m in my element when I’m out of my element. I like a challenge. I like to be out of place.”

These cross-genre experiences in writing, performing and producing have provided Rudolf with a unique insight into creating music.

“I take a little bit away from everyone that I work with,” explains Rudolf, noting that he has picked up an incredible work ethic from the guys behind Cash Money Records. “They just get in [to the studio] and they work hard all night.”

He also explains that his experiences with hip-hop producers have taught him “how to see what the hook [of the song] is going to be and make sure it shines — that the sing-along quality is there.”

It’s exactly that sing-along quality that has attracted so much attention to Rudolf’s music — especially in the sports arena.

You can’t go to any sporting event without hearing “Let it Rock,” and now Major League Baseball’s MLB Channel has chosen Rudolf’s new song, “Here’s to Us,” as the anthem to the 2013 post-season, playing ads featuring his song during the World Series.

“I actually didn’t know anything about it at first. It’s just so rewarding to have them choose this song.”

With an Americana, stripped-down feel, Rudolf tells us that “Here’s to Us” is about hope and inspiration. “Everyone’s going through some challenges in their daily life and I wanted to write a song that says we’re in this together. It’s human experience.”

In the song he sings, “may your dreams never leave you even when you’ve lost it all,” and he explains that, even as an artist, there are days where he feels like he’s lost it all.

“Making it as a musician is not an easy road for anybody and I don’t want anyone to think I forgot what it’s like to be an underdog because I still feel like I am.

“You grow up and you always have that mentality of never feeling like you quite fit in. But I think that’s what people relate to in my music. They feel like they don’t quite fit in either. I think it never goes away.”

“Here’s to Us” is the first song off of Rudolf’s as-of-yet untitled upcoming album, due out in mid-January.

Rudolf will also be launching a tour in support of his album. In fact, recently he played in Napa Valley at the food, wine and music festival Live in the Vineyard.

The three-day event bills itself as “a total immersion in music, wine and food.” Along with Rudolf, Jason Derulo, Gavin DeGraw, James Blunt and numerous other artists, chefs and wineries all get together in this exclusive event.

But don’t expect that Rudolf toned it down for the event.

Gavin DeGraw still doesn’t want to be anyone else >>

And while Napa is a nice, relaxed atmosphere, Rudolf explains that there are very few places that can beat his home town of Miami.

“I grew up in NYC, but I really found myself when I moved to Miami.”

And while nothing can beat Miami, as an artist and songwriter, Nashville is quickly becoming one of Rudolf’s favorite places as well.

Besides gaining a new appreciation for beer, Rudolf explains, “there’s lot of real talent [in Nashville] as far as the writers go. There are great musicians. They really care about the storyline, the lyrics and the whole process.

“Being in Nashville got me inspired as a songwriter again.”

Kevin Rudolf’s “Here’s to Us” is available to download now on iTunes and you can look for his new album in mid-July.

What did you think of Kevin Rudolf’s “Here’s to Us?” Is it a little bit country or a little bit rock and roll? Let us know.