‘NSYNC member Chris Kirkpatrick married his longtime girlfriend over the weekend, and four of his oldest and best friends showed up to usher him into married life. 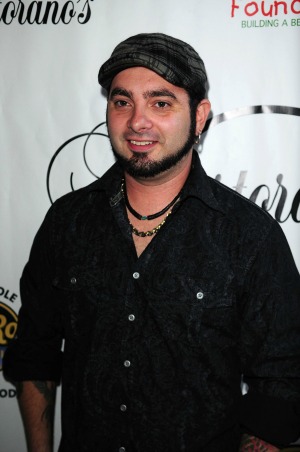 Chris Kirkpatrick was married over the weekend, and his wedding offered something Justin Timberlake‘s wedding did not: an ‘NSYNC reunion. The former member was married to his fiancé Karly Skladany Saturday in Orlando, Florida.

The couple was engaged in October 2012 in Italy, the same time (and country) that Timberlake married his new bride, Jessica Biel. There was talk some of the band members felt slighted for not being invited to Timberlake’s wedding, but they showed there were no hard feelings when they all showed up to perform with Timberlake at the MTV Video Music Awards two months ago.

Kirkpatrick’s wedding means there were two ‘NSYNC reunions in one year, giving the guys practice in case they ever decide to perform together again (one can hope!). Lance Bass spoke with Sirius XM back in October about how Kirkpatrick and his bride were having a cost-effective wedding.

“What’s really hilarious to me is that we went to get fitted for our tuxes at Men’s Warehouse — and he got us the cheapest tuxes there he could possibly get, which I think is so Chris and very lovely,” Bass said, according to Us Weekly. “I mean that’s just who he is.”

He added how funny it is to “know that Justin Timberlake is going to be in a Men’s Warehouse tux ushering the wedding.”

Kirkpatrick posted on Twitter about his excitement for married life, and having all of his friends in attendance at his wedding.

“Chris and Karly held hands during the ceremony and kept their eyes locked on each other,” a source told Us Weekly. “There was so much love between them and they looked ecstatic to be saying their vows and calling each other husband and wife.”