Brooke Mueller lost another one to Charlie Sheen today when a judge refused to grant an emergency restraining order against the Anger Management star. 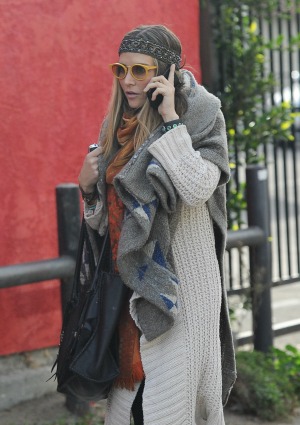 Brooke Mueller fears Charlie Sheen is out to harm her, but a judge isn’t buying it. The rehabbing ex-wife of the Anger Management star filed an emergency request for a restraining order today after Sheen went off about a DCFS decision to allow her to visit their twin sons, but the judge shut her down.

In her filing, Mueller quoted a statement from Sheen saying, “I will exercise every resource at my disposal. I will, I will, I will, I will empty my entire war chest and if I can’t get it done, I know a guy who can,” which she feels implies he wishes to do her physical harm.

“I have struggled with addiction. I successfully completed a lengthy in-patient rehabilitation this year and I have been substance free for seven months,” Mueller said in court documents.

“I have reached out repeatedly to Charlie Sheen seeking that we find peace for the sake of our children over the past seven month only to be told, ‘lose my number douche bag.’ Petitioner is seriously upset that I am in recovery and have successfully maintained my sobriety. I am doing so for our children and myself. I love our children more than anyone can imagine. I am fighting for them everyday. I do not want them to have two severely drug-addicted parents.”

“Charlie Sheen is furious that I am doing so well, he had hoped I would relapse in order to continue his long-sought quest to have all his children under one roof with his former wife.”

The couple’s sons, Max and Bob, are currently living with Sheen’s other ex-wife, Denise Richards.

The judge said she has no case for an emergency order, but set a hearing for a month from now where she can battle it out in person.

Sheen, not eager to take the high road, taunted Mueller about her failure on Twitter.