Sometimes I sit drinking Red Bull in my cat pajamas and wonder who created the first parody ever. And then as I surf YouTube for parodies, I realize that some people are so creative and wonder if there’s such a thing as being over-creative. Because some of these reinvented parody lines are so weird, I just can’t decide. But I like it. Here are my top 5 YouTube parodies. 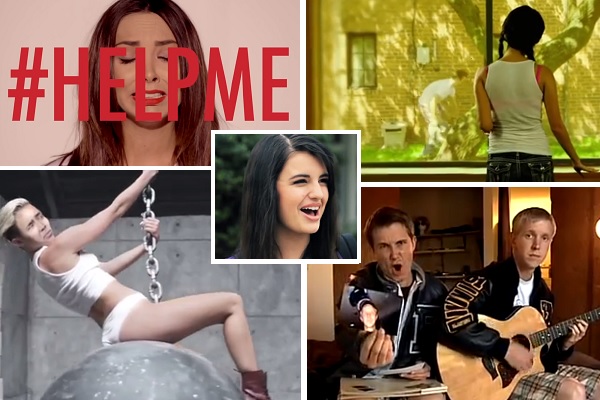 www.youtube.com/embed/J3twwafch4g
Thoughts: I’m usually not a big fan of parodies that make fun of the original video or artist in a mean way (it’s still bullying!), and this borderlines that a bit, but I can’t believe how much like the original it is in every way! That’s why it made this list, from the characters they cast to the hashtag font to the outfits. It’s so well done it’s cray cray.

Now compare it to the original

And now for the best Vine… probably ever

www.youtube.com/embed/2XQGcMrq4bQ
Thoughts: How did they do that Nicholas Cage one? And that random Vine video of the tire-swing man is probably the funniest thing I’ve seen since Scary Movie 2.

Now compare these to the original

www.youtube.com/embed/zzfQwXEqYaI
Thoughts: I wonder what the people who did the voice overs do for a real job. I would love to watch them for a day. My hand is a dolphin!

Carly Rae Jepsen’s “Call Me Maybe” (The Key of Parody!)

www.youtube.com/embed/iTthJI0rDnk
Thoughts: My friend Ben filmed the original music video, so I’m a little biased; but it’s so funny!

www.youtube.com/embed/oDgs1iroYyY
Thoughts: I actually just found this video as I was looking for one last parody for this list (ha!), but it’s so funny! His “Yeeeyy-heee” at 1:31 is my favorite part. Look at this photograph. Like, for realz, look at it. Props to them for keeping a straight face the whole time. I would have cried from laughing.