The highly anticipated new album from Eminem is out tomorrow! Before you race off to find your credit card, though, stream it for free today. 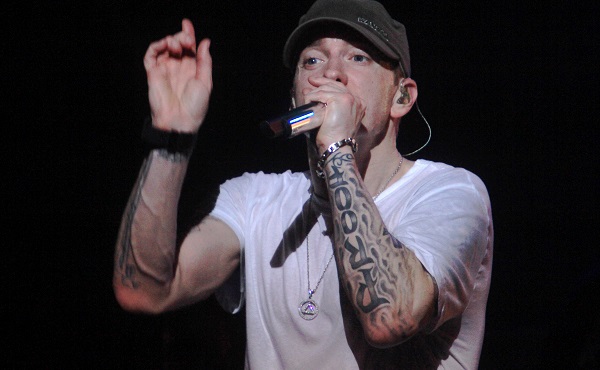 We can’t imagine there’s anyone on the fence about whether or not they want to purchase the new Eminem record, The Marshall Mathers LP 2. However, if you’re unsure about dropping cash/credit on his new release, you can live stream the entire thing today on iTunes (and probably tomorrow on Spotify).

If you’re not sold on the return of Slim Shady, a listen to LP 2 ought to clear things up. Eminem is back with a vengeance. He spits bile on numerous occasions, dropping hate throughout the record. Though, admittedly, not to the same comedic effects as his first couple releases. In general, Eminem strays almost entirely from poking fun at celebrities. The dude’s still pretty messed up, though. That’s best heard in the album’s opener, “Bad Guy.” The track is a continuation of 2000’s “Stan” and features Stan’s little brother coming to kidnap Em and take him on a gruesome ride through (where else?) Detroit. Meanwhile, “Symphony in H” is just downright nasty. Eminem’s version of mean is everyone else’s definition of “cruel.” But he does it so well and that’s why we love him.

It’s not all dark times, though. Eminem made that clear on his first single “Berzerk” when he sampled classic rap for a new party anthem. (The song even features a rare celebrity dig, this time at a Kardashian.) Meanwhile, his newest collaboration with Rihanna, “Monster,” may not be fun and games, but it’s already blowing up all over the charts and is currently at the highest spot on the Billboard 200. The song has a catchy hook from Rihanna, features a foot-stomping breakdown and displays Eminem at one of the best versions of himself… even if he’s admitting he might be a little crazy.

Still. We recognize that if you tuned in to Saturday Night Live this weekend, you may have your doubts. Eminem’s appearance on SNL was not just weak, it was clearly lip-synched. Twitter exploded with chastising, jokes (we liked any of the ones that referenced Ashlee Simpson’s SNL flub) and, of course, people who blindly applauded the mess they’d just witnessed. To Eminem’s defense, many have shared that the network required the low-mic/lip-synching in order to avoid any offensive freestyling from the rapper. That might have been forgivable if not for the random back-up dude with the louder mic and ridiculous stage presence that paced around behind Eminem.

While we can’t say for sure if Eminem’s SNL disaster was talent- or network-related, we can at least vouch for The Marshall Mathers LP 2 as being the highlight of 2013’s rap. It’s definitely worth your $10. Whether or not you want to shell out your hard-earned cash for a possible concert ticket, though, is on you.

Don’t insult us! Sign up for our newsletter and have music news delivered to your inbox >>