Drew Barrymore is reportedly expecting another baby, several sources have claimed. The actress was seen sporting a very roomy dress on the red carpet that very much hinted a hidden baby bump. 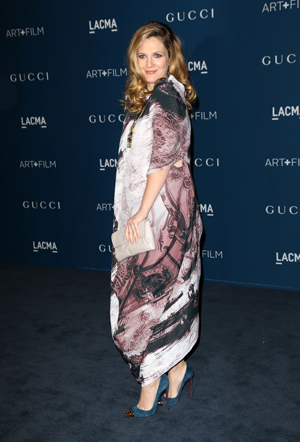 Just 13 months after the birth of her first child, Olive, Drew Barrymore may be pregnant again with baby No. two, sources confirmed on Monday. The actress/producer walked the red carpet over the weekend wearing a flowing dress that seemed to cover a growing belly.

While Barrymore’s rep hasn’t replied to requests for comment yet, several sources confirmed to Us Weekly that the Big Miracle star is indeed expecting. Not only did Barrymore look pregnant at the LACMA Art+Film Gala’s red carpet on Saturday, but she was also seen wearing a casual outfit this weekend that showed an apparent expanding baby bump.

The 38-year-old Flower Cosmetics founder’s second pregnancy news came very quickly after giving birth to her first baby girl. But it’s not too surprising, as she recently told InStyle magazine she wants more kids, “maybe two so they can run around life together.” Additionally, she also told Jay Leno she wants more than one child.

“I grew up as an only child, and although that really works for some people and for some parents that’s the way they want to do it…” Barrymore said on The Tonight Show With Jay Leno on Oct. 7, adding that she wants to be the Griswolds, the crazy family from the ’80s comedy, National Lampoon Vacation.

“I want the kids in the back rolling their eyes at mom and dad,” Barrymore joked. “I want Rusty and Audrey, theme parks and the whole nine.”

Drew Barrymore raising her daughter in the Jewish faith >>

Barrymore also gushed about 1-year-old Olivia, saying she’s beginning to talk and is just about ready to start walking “next week.” She’s also very fond of her husband, Will Kopelman, who’s “just a wonderful man.” Adding that her wedding day was perfect, she revealed how Kopelman had the great idea to bring in a silhouette artist to their ceremony.

“My husband, he works in art, and he has an incredible eye for design and detail,” Barrymore explained. “So we just thought to bring a silhouette artist. So everybody got a really cool silhouette of them and their partner, or them and their kids.”