Well, that was a surprise! There was no engagement, but they had a wedding. Megan Hilty got hitched to Brian Gallagher on Saturday! 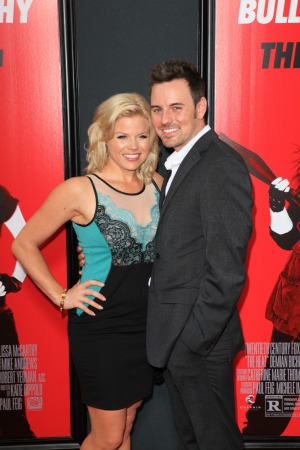 She said, “I do!” Megan Hilty surprised everyone when she got married to actor Brian Gallagher at the Venetian chapel in Las Vegas on Saturday. The couple had been dating about a year before their nuptials.

The Sean Saves the World star told People, “We were so excited to be married that we skipped the engagement altogether!”

The couple first met in a fitness class when they were starring on Broadway. Hilty has had starring roles in shows like Wicked, in which she played Glinda, and 9 to 5, in which she played the role of Doralee (originated on screen by Dolly Parton). Gallagher worked on the revival of Jekyll & Hyde. The couple have been a tight unit, as they were seen together canoodling in Hawaii and on the red carpet together at the Tony Awards in June.

Hilty was previously linked with fellow Broadway actor Steve Kazee. They dated for five years and broke up in April 2012.

At the intimate vows, the 32-year-old bride wore Badgley Mischka and the groom donned a J.Lindeberg suit.

The two seemed thrilled about marrying each other — Gallagher’s Instagram photo showed off their ecstatic faces and their wedding bands.

He captioned the photo with “WE DID IT!!! #justmarried.”

The 33-year-old groom is currently working on a solo album while the former Smash star shoots her NBC sitcom. The newlyweds will also be performing together on Nov. 21 and 22 at WitZend and the Catalina Jazz Club in Los Angeles.