Dolly Parton has known Miley Cyrus since she was born, and Parton may be one of the few people who just want Miley to go out and continue to do what she is doing. 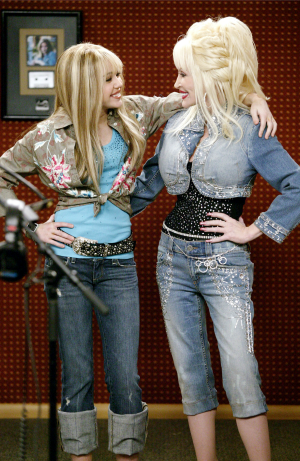 Dolly Parton has become the latest to comment on Miley Cyrus‘ recent growth spurt, but Parton actually has some say in Cyrus’ life for a simple reason: she’s Miley’s godmother.

“I’ve loved her through the years and watched her grow up, and I’ve seen how smart she is and how talented she is,” Parton said, according to the Huffington Post. “I don’t think people really realize yet what a great singer and writer she really is. She’s just trying to find her own place and wings and learn to fly.”

Parton talked with the London Evening Standard about Cyrus and said she would never tell the 20-year-old what to do with her life or career.

“If she needs my opinion on something I will surely give it and there have been times we’ve talked,” Parton explained. “But I would never dream of calling her and saying, ‘Well why are you doing this?’ or, ‘You shouldn’t do this or that.’ I know that she has thought this all through. We’ll let her go and do her own thing.”

Numerous celebs have shared their thoughts about Cyrus, and they have all sorts of opinions. Singers Lady Gaga, Justin Timberlake, Britney Spears and Kanye West are all Team Miley — but Cher, Elton John and Pink are not. Sinead O’Connor even went so far as to write a letter to Cyrus telling her they are nothing alike.

“It’s not easy being young,” Parton said. “It’s hard to know what to do. You’ve almost got to sacrifice your damn soul just to get anything done.”

Despite all the recent antics and controversy, Miley Cyrus seems to be winning this one. Her new album Bangerz came in as the No. 1 album its first week out.

The 67-year-old Parton, who is recovering from a recent car crash, said she would even be interested in singing a duet with her goddaughter — and we can guarantee there are plenty of fans out there, young and old, who would love to hear that.