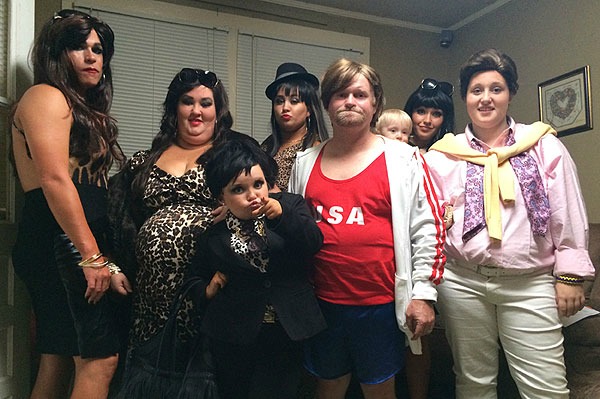 Halloween was a fun day for many celebrities, but one reality show crew really outdid themselves this year. Alana Thompson aka “Honey Boo Boo” decided that another reality show family deserved a little spoofing on the spooky holiday.

This year, the 8-year-old and her family dressed as the Kardashians. The TLC star took it upon herself to be the center of attention by trying out her best Kris Jenner impression. The former pageant star donned dark sunglasses, a short wig and an animal print outfit that Jenner is known to sport.

Mama June was none other than Kim Kardashian while her husband Sugar Bear dressed in his best red, white and blue Olympics gear as Bruce Jenner. The rest of the Thompson clan fit right into their Kardashian roles with Anna as oldest sister Kourtney, Jessica as Khloé and baby Kaitlyn as Kourtney’s daughter Penelope.

As for Pumpkin, she took her costume to the next level by dressing as Kourtney’s baby daddy, Scott Disick. Her wardrobe included a pink shirt with a pale yellow sweater wrapped around her shoulders and white pants to complement the outfit. Her wig even accentuated Disick’s carefully styled coiffure.

Mama June wasn’t the only Kim Kardashian of the bunch, Uncle Poodle participated as the new mother as well.

Honey Boo Boo is probably set up for life >>

The matriarch of the Thompson family talked to People about their costume selection.

She said, “We decided to dress up like the Kardashians because everyone seems to compare our family to them. Now we’re just the redneck version.”

As for Honey Boo Boo, she was looking forward to eating the treats she received on Halloween.

For fans eagerly anticipating the return of Here Comes Honey Boo Boo, audiences will have to wait until the Jan. 16 premiere on TLC.