Even though his ex-wife has been through a tough month, Kelsey Grammer hasn’t helped her out with their kids. In fact, it’s been months since he’s seen them. 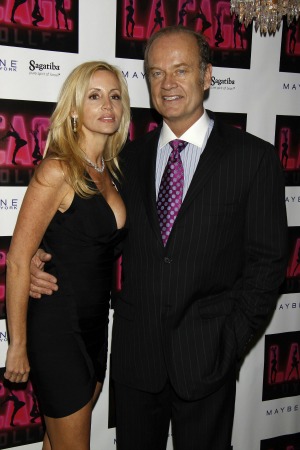 Camille Grammer has had a rough month with her cancer diagnosis and the restraining order she had instated after alleged abuse by her former boyfriend. Reports are now coming in that her ex-husband Kelsey Grammer has not seen his two kids from that marriage for approximately six months.

What’s truly sad is that while Camille was recovering from surgery in Houston, Texas, the two children did not see their father.

A RadarOnline source confirmed, “Kelsey hasn’t even seen Mason, 12, or Jude, 9, in over six months.”

In fact, the 45-year-old mother-of-two revealed that she hadn’t even heard from her ex regarding her health.

She wrote on her Twitter account, “No, Kelsey has never contacted me or the kids about my health.”

The former Real Housewives of Beverly Hills star wanted to make sure her kids kept on track while she was dealing with her health issues. They remained in the Los Angeles area while she recovered.

“The children remained in Southern California while Camille underwent a radical hysterectomy for endometrial cancer in Houston,” said the gossip site’s insider. “She wanted the kids to remain in school, and they were well cared for. Kelsey didn’t see the children while Camille was in Houston for her cancer surgery.”

The source continued, “He didn’t make any attempt to visit them, or have the kids come stay with him. He does call the kids, but it’s been a very long time since they actually saw their father.”

A rep for the Frasier star sternly denied RadarOnline’s claim by stating, “Your sources are full of it and clueless as well.”

As for the kids and Camille, they’re currently protected under a temporary restraining order from Dimitri Charalambopoulos, her former boyfriend. He allegedly abused the reality star on Oct. 16 while she was recovering from surgery in Texas.

Camille is now recuperating in Los Angeles while she undergoes chemo and radiation treatment.