Kanye West does not appear to be familiar with the words “no,” but singer Lana Del Rey has familiarized him with it, when she would not play at his proposal event. 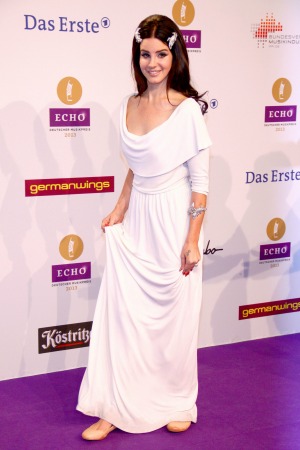 It has been reported that Kanye West is planning a very lavish wedding ceremony next summer and there are no limits to the extent that the “Black Skinhead” rapper will go to make it the event of the century.

Although, one person who didn’t want anything to do with Kimye’s plans and preparations was the “Summertime Sadness” singer Lana Del Rey.

West apparently requested that the singer perform during his proposal to Kim Kardashian on her 33rd birthday, when he hired out the AT&T Park in San Francisco, but Del Rey declined.

Guess there are people in this world who can say no to West! A source has revealed to Radar Online, “Lana politely declined, and didn’t give any reason for not being able to perform.”

“It was a very firm no from Lana and her camp. Kanye did try to push it, but didn’t get anywhere. Kanye decided to hire an orchestra to perform the song for Kim, and he was much happier with how it turned out.”

West may have settled for a 50-piece orchestra instead, but he still got them to play Del Rey’s hit track “Young and Beautiful.” Kim Kardashian is apparently a massive fan of the singer and loves that song of hers especially!

The source added, “Kim was bummed that Lana didn’t perform for the big event, but she is still a huge fan. She just loved that Kanye tried to make it happen.”

“Kim is jokingly saying Lana will want to perform at their wedding.”

Do you think Kimye will be able to charm Lana Del Rey enough to get her to perform at their wedding? We wonder…