It may be Halloween, but only personal demons are coming out to play on The Vampire Diaries, and the past haunts Katherine in a shocking way. 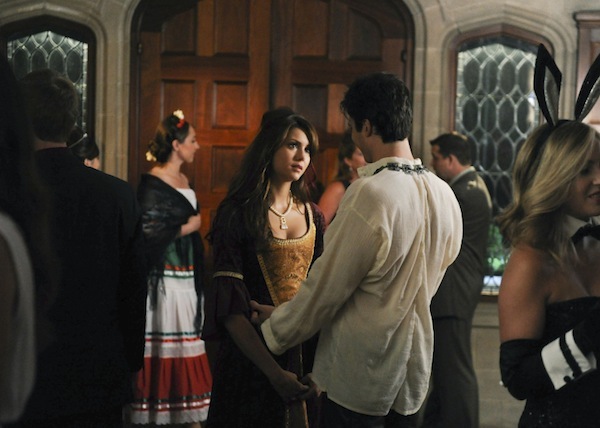 Grieving Elena (Nina Dobrev) isn’t so fun. Remember what happened after Jeremy died? Season 4 of The Vampire Diaries was rough for the girl.

Sure, she had to deal with Bonnie’s death eventually, but couldn’t they have at least waited until after Halloween. She doesn’t even want to dance with Damon (Ian Somerhalder) on tonight’s episode. Where’s that fiery chemistry? This had better not be the beginning of the end for the two. I find myself constantly concerned their relationship is on the rocks. Please tell me I’m not alone.

Dr. Maxfield needs to make up his mind already

Elena tries to recover from her grief by discovering what Dr. Maxfield knows. Didn’t he offer to talk to her right before she left college? He invited her to his office hours for a chat, if you’ll remember. It didn’t seem like he was trying to be evasive. Why doesn’t she just ask? I know, I know. The drama is more exciting. Especially when he’s got new vampire Jesse in his secret lab. Dr. Maxfield spends the beginning of the episode tempting shirtless Jesse with blood to study the baby vamp’s reaction.

Oh, yeah, and Dr. Maxfield concludes Jesse’s a perfect candidate. Whatever that means.

We’re also introduced to Aaron, a boy who grew up with Megan. Seems like Megan may have had a connection to the supernatural world, after all. Turns out, Dr. Maxfield is Aaron’s legal guardian.

Again with the changing tides. Suddenly, Dr. Maxfield doesn’t want to talk. He doesn’t want to see Elena again and tells her to leave town. He seems to be trying to protect her because he tells her the wrong people will soon start asking the right questions if she doesn’t leave.

SPOILER: By ending their relationship.

Tyler says he can’t love Caroline (Candice Accola) more than he hates Klaus (Joseph Morgan). Ouch! Still, she begs him to stay. He doesn’t, and the relationship is officially done. We really hope this time it sticks. No more on again, off again long-distance shenanigans.

Let Tyler go off on his Klaus hunting spree. Who knows, maybe he’ll pop up in The Originals. That would be interesting.

You can call her the “brown-eyed bitch of a cure”

Turns out, Silas doesn’t just need a little sip of Katherine’s blood. In order to get the full effects of the cure, he has to drain her dry. Nadia still hasn’t turned Katherine over to Silas. So what’s her angle?

She’s got a pretty good one, actually.

After Katherine stabs Nadia with a pole, the two share a touching moment of reunion where Katherine explains she tried and failed to find Nadia after returning for her centuries earlier.

Silas tricks Qetsiyah into thinking he’s Stefan (Paul Wesley). It doesn’t end so well for Silas. Qetsiyah freezes his heart so his blood stops coursing through his veins, which ruins Damon’s brilliant plan to appease the balance by killing Silas and bringing Bonnie back.

Good thing Damon’s got a Plan B: Katherine.

She shows up at the Salvatore house only to have her neck shoved in Silas’ undead mouth. Silas drains all of her blood and reawakens, presumably cured. But Katherine isn’t dead. She, too, wakes up with a heartbeat. Is she becoming a vampire again? But if that’s the case, why does she still have a pulse?