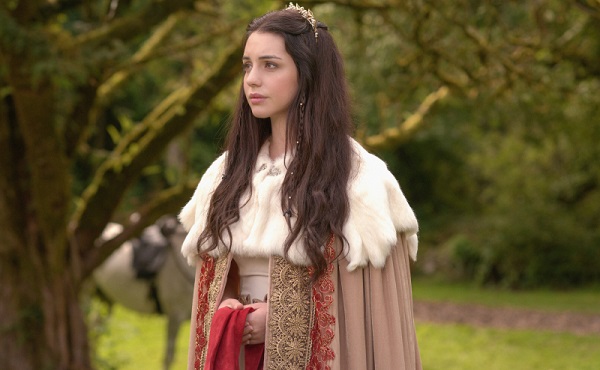 Is anyone else beginning to find Reign a little monotonous? There’s so much to love about Reign: The sex, the costumes, the hot dudes. Yet there’s a predictability to almost every scene. Is it a good predictability… or is it the boring kind?

This week we watched as Mary (Adelaide Kane) gained a new “enemy.” The King of France may not be out for Mary’s head, like his queen, but he isn’t playing nice, either. With hundreds of English soldiers on the border of Scotland, Mary looks to her fiancé’s father for a miniscule amount of military support and is given nothing more than a half-arsed apology for her current predicament.

That’s not exactly unexpected, though. Is it? The king is hardly a man of his word. There’s the fact that he refuses to let his son go through with a wedding to Mary. And his countless mistresses. He’s far from an upstanding citizen. The only things he has going for him are his looks… and his distrust of his wife (Megan Follows). And, listen, I know Megan Follows is a very talented actress, but is anyone else having a hard time taking her seriously as an evil queen? Her acting is just a little too amped up and, you know, she’s Anne Shirley.

When Mary can’t find the help she needs from her possible future father-in-law, we immediately stumble upon her savior in the form of the Portuguese Prince Tomas (Manolo Cardona). Greer and Tomas are out wandering the supposedly haunted/possessed/evil woods when they find Mary up in a tree after retrieving a ball for the now disappeared young Prince Charles. From the moment the prince looked up at Mary, it was obvious how the scene would unfold. Sure, enough: Mary immediately saw him as the answer to her political woes and he immediately admitted to being smitten with her. It was as easy to see as a semi in your driveway, no? At a secret meeting in the hill country, Tomas presents Mary with a mother lode of jewelry, the protection of an army and an immediate marriage. All of which is currently being withheld from her by her French “allies.”

Not one to go back on her word… yet, Mary agrees to think it over and then immediately proceeds to use it as an ultimatum on Prince Francis. Of course, that sends Francis (Toby Regbo) into motion. Despite continuing to seem rather cold toward Mary, he doesn’t want to lose her, either. He blackmails his father with knowledge of his new lover (the lady-in-waiting, Kenna) in order to secure six companies of men to help Scotland.

Of course, in the long run it doesn’t work. They send Bash to alert the companies and soon enough he comes back to the castle bloodied up by unknown enemies. Everyone has their suspicions, but it seems pretty obvious to me that it was either the queen or the king. Yes, Bash is his son, but he doesn’t seem particularly alarmed at Bash’s grave condition, does he? And, of course the queen doesn’t care about the bastard son.

In the end, Mary agrees to marry Tomas and they stand together on the shore of France as his men float off on their way to Scotland.

I take a few issues, though

—Most importantly is Nostradamus. I don’t care that he’s not even in the right century nor that he’s predicting the more immediate future instead of things hundreds of years out. My issue is with his “predictions” in general. They’re all worded cryptically for dramatic effect, but it’s overly dramatic. Did they give him weird, no-pupil contacts? Plus, telling Mary that the Lion will fight the Dragon in the field of poppies? That seemed obvious from the very beginning. Even if we’re not all anglophiles here, Mary surely must know the lion is on the English crest. Of course, it took her until Portugal’s dragon flag was raised on the boat before she put it together.

—Greer’s reaction to Mary’s proposal from Tomas seems completely unnecessary. Her heartache is fair enough, certainly. But this nonsense of being mad at Mary? Mary is there to help their country… not become BFFs with her ladies-in-waiting or make their love lives her priority. I feel like a real lady would have known that? It all seemed incredibly pointless, too, considering the fact that the minute they put Greer in the kitchen with the cook, it was obvious they would end up together. And, of course, they were! Also, is it just me or does she look a lot older than the other girls?

—The scene with Bash and Kenna was also bothersome. Who, in a million years, would talk about their lover to their lover’s son? Castles are notorious hotbeds for gossip. She can’t possibly believe no one knows of her romance with the king. Then, to turn around and lament the situation to Bash? So weird… and gross. I appreciate his calling her out, though. However, their closeness concerns me. Kenna isn’t good enough for Bash. Admittedly, I’m not sure who is.

With all that out of the way

The most inspiring part of Reign wasn’t the actors, the romance, the setting or the drama, however. Instead, Reign‘s strongest asset continues to be its amazing episode soundtracks. This week we heard:

The best part of the season might be the Season 1 soundtrack CD that will, hopefully, be released after the finale. (A girl can dream, right?)

I’m going to remain hopeful about Reign, though. I still want to see Prince Tomas shirtless. Plus, that kiss between Francis and Mary was pretty intense. And, weren’t we promised a romance between Mary and Bash? Fingers crossed…