With a career spanning more than three decades, George Strait has cranked out countless country hits. He’s up for Entertainer of the Year at the 2013 CMAs, and we think this king of twang deserves to reign supreme. Here’s why. 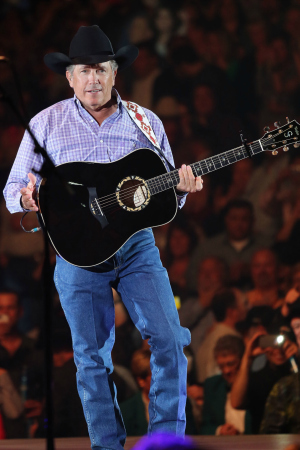 He’s going out with a bang

In September, George Strait signaled the end of an era by announcing that The Cowboy Rides Away Tour would be his last — he is officially retiring from touring. Why does this make him worthy of an Entertainer of the Year Award? Try this on for size… he sold out every date of the first leg of his farewell tour, which included 21 concerts, earlier this year. The second leg of the tour will consist of 20 concerts and is slated to start in early 2014; it is expected to sell out as well.

60 was a good year for this cowboy

Strait nabbed his 60th No. 1 hit with “Give It All We Got Tonight,” during which time he was 60 years old. Released in October 2012, the single inspired the#60for60 movement by the country legend’s label to make it his 60th No. 1 single on the country charts while he was still 60. Not surprisingly, Strait remains the 20th most played singer on country music radio.

He’s pretty much a rock star

Sure, he’s sold more than 70 million albums in the U.S., been inducted into the Country Music Hall of Fame and churned out 44 Billboard Hot Country Songs chart toppers. And, according to the RIAA, he’s the 12th best-selling recording artist in the States overall, and is third only to Elvis and The Beatles in gold and platinum albums. But despite all of those accolades, Strait still seems like a super-nice, super-humble guy — a guy who grew up on a cattle ranch in Texas, married his high school sweetheart and still finds time to surprise Blake Shelton with an impromptu karaoke duet. Plus, did you see Pure Country? Classic!