Robin Thicke has found himself in an uncomfortable situation. He is being sued by Marvin Gaye’s family, who claim the song that gained him fame, “Blurred Lines,” infringed on their father’s copyright. 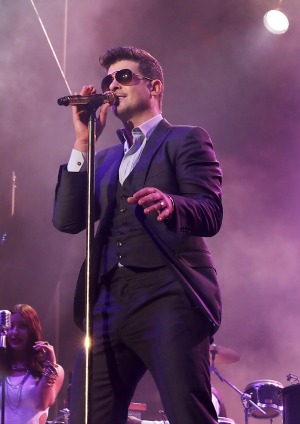 Robin Thicke has enjoyed immense success with his chart-topping single “Blurred Lines,” but now his joy may soon be shattered.

It has been reported that Marvin Gaye’s family have finally decided to sue the 36-year-old hitmaker for copyright infringement for the popular song.

This lawsuit will certainly rain on Thicke’s parade, as Gaye’s children are seeking damages and a portion of all profits earned on the hit track.

Why? Gaye’s children claim that “Blurred Lines” is a copyright infringement on their legendary father, Marvin Gaye’s 1977 song, “Got To Give It Up.”

Gaye’s family and Bridgeport Music Inc. have been threatening the lawsuit for several months and have finally done it!

However, Thicke is adamant that he did not infringe upon Gaye’s copyright. He and Pharrell Williams have also filed a preemptive motion, after the initial threats for a lawsuit happened in August.

Thicke has asked a court to rule that the pair did nothing wrong and that there are no similarities between the two tracks, “other than commonplace musical elements.”

However, the “Give It 2 U” singer may have found himself in some hot water, because the Gaye family is using his own words as evidence against him. Taking excerpts from interviews that Thicke made to BIllboard and GQ, where the singer claims to have drawn inspiration from Marvin Gaye’s track “Got To Give It Up.”

Thicke told GQ, “Pharrell and I were in the studio and I told him that one of my favorite songs of all time was Marvin Gaye’s ‘Got to Give It Up.’ I was like, ‘Damn, we should make something like that, something with that groove.'”

“Then he started playing a little something and we literally wrote the song in about a half hour and recorded it.'”

Thicke has made no secret that Gaye has been one of his greatest musical inspirations, but that doesn’t necessarily mean he copied his idol’s work.

Siblings Nona Gaye and Frankie Christian Gaye think otherwise, and have also decided to file a counterclaim, stating that not only did Thicke steal one of their father’s songs, but two.

According to the Gaye family, Thicke’s song “Love After War” is the same as Gaye’s hit, “After the Dance.”

The Gaye family’s legal documents were obtained by The Hollywood Reporter and read, “[Thicke’s songs] are a blatant copying of a constellation of distinctive and significant compositional elements of Marvin Gaye’s classic No. 1 song.”

The family is also angry with music publisher EMI, who they believe failed to protect their father’s music and have subsequently filed a legal claim against them.

The legal claim states, “This conflict has resulted in EMI’s intentional decision to align themselves with the [“Blurred Lines”] writers, without regard to the harm inflicted upon the rights and interests of the Gaye Family, and the legacy of Marvin Gaye.”

42 mins ago
by Summer Cartwright