Jason Statham has turned over a new leaf. In Homefront, he’s a family man whose tender nature is tested when his daughter’s put in danger. 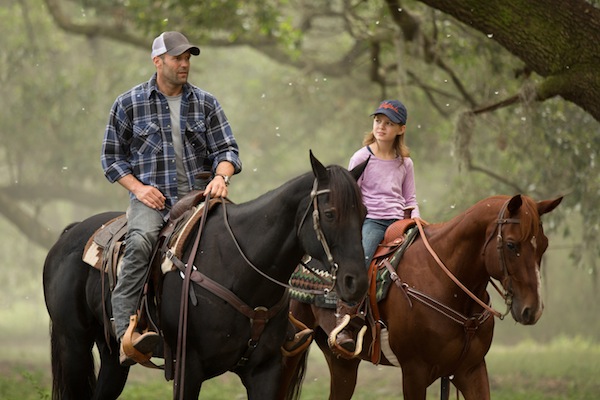 Jason Statham is one of the biggest action stars around. The British actor has starred in macho films like Snatch and The Expendables, as well as The Transporter and Crank series. In next month’s Homefront, Statham leaves most of that at the door.

He plays a single father trying to raise his daughter in a small town. Unfortunately, he gets on the bad side of the town’s most intimidating figure (James Franco) causing an all-out war. Statham’s character is an ex-DEA agent, so he knows how to take care of himself. He doesn’t like to use violence, but he will if necessary.

In this case, he’ll be forced to use his fists to protect his family. He quickly learns his new home isn’t as innocent as it appears. There are some dirty dealings going on that he finds out about the hard way.

In the following scene, Statham and Izabela Vidovic, who plays his daughter, are having a heart-to-heart. The young girl misses her mother and gets very emotional. Statham shows a vulnerable side to him that we’ve never really seen on film. These two make an amazing father-daughter team.

What do you think of Statham as the doting dad in Homefront?