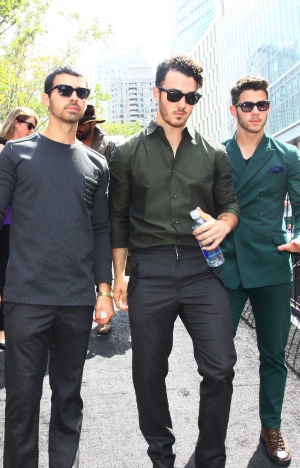 The Jonas Brothers have been mostly silent since they suddenly canceled their tour earlier this month, and hadn’t commented on the breakup rumors until now.

All three brothers appeared on Good Morning America Wednesday morning, just a day after confirming they had broken up.

“I think it was time, and for us it took some time getting there,” Kevin Jonas said, according to E! News. “But we feel like it’s time that the Jonas Brothers come to an end.”

5 Reasons why The Jonas Brothers may have quit Twitter >>

The band had been on hiatus for years before announcing the new tour. Just days before they hit the road, they canceled all their dates. The brothers said Nick Jonas was the one who first brought up the idea of breaking up.

“We’re family first, and that’s always been our main priority, and so honesty within what we do as a group was really important,” he explained. “I came to the table with the guys just before we were prepping to leave for tour, and I shared my heart with them, my feelings. In a nutshell, I said, ‘Look, I feel like we’ve had some complications within the group for a long time without addressing them. I think this train will fall off the tracks without really getting real about some of the concerns and some of the limitations that we may feel as individuals in the group.’ It was a tough conversation. It was the first time we really had that real conversation. It was a few days of working through it.”

The band page was soon deleted from Twitter, and two of the brothers posted very vague tweets on their personal accounts, but they’ve otherwise stayed silent. It sounds like all three brothers realized how nice it was not to be tied to the band and be able to enjoy their individual projects more.

That doesn’t mean they aren’t still friends. If anything, it may have strengthened their relationship.

“[We] feel like we’re best suited to do our own individual things, all [the] things we’re passionate about, and choose to be brothers first,” Joe Jonas explained.

The happy talk was slightly different than the initial tour cancellation announcement, which said they couldn’t agree on their musical direction, and that “there is a deep rift within the band.”

Fans devastated over the tour cancellation got another piece of bad news: The group’s first album since 2009’s Lines, Vines and Trying Times, tentatively titled V, has been “shelved,” according to E! News.

The Jonas Brothers’ canceled tour could cost them millions >>

Each brother is moving on to new things. Nick has ventured onto Broadway and Kevin is having a baby with his wife Danielle. Through it all, they haven’t forgotten about the fans.

“We have the best fans in the world and have for our entire career, so we thank them for that and thank them for really understanding this move,” Nick said.