Is Kerry Washington about to be a new mom? Baby rumors heat up as a close friend says the actress is four months pregnant with her first child. 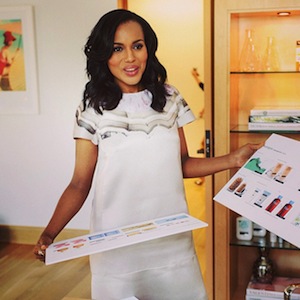 A close friend of the Scandal actress spilled the news that Washington is expecting her first child with husband Nnamdi Asomugha.

“She’s about four months along,” said a source in Washington’s inner circle to Us Weekly. The surprise baby news comes on the heels of that actress’ summer wedding to 32-year-old Nnamdi, a cornerback for the San Francisco 49ers.

Let’s talk Olivia Pope and men: Are you Team Fitz or Team Jake? >>

It’s not yet known if Washington knew she was pregnant at the time of her wedding.

Paparazzi caught Washington outside the Ritz-Carlton in Manhattan on Tuesday bundled up in a heavy pea coat and sporting a large tote bag over her abdomen, which only fueled speculation that the Emmy-nominated actress was hiding a growing baby bump.

In the photo above, posted Oct. 18, 2013, she traded in her usually form-fitting wardrobe for a much looser top that would hid a growing baby bump perfectly.

Will the star confirm her baby news? It’s unlikely since she is notoriously private. In September 2013, the Scandal star told Glamour magazine why she refuses to open up about her personal life to the press.

“I learned through experience that it doesn’t work for me to talk about my personal life. I’ve had earlier times in my career when I did talk about it. I was on the cover of a bridal magazine [InStyle weddings in 2005]. But I couldn’t just turn around say, ‘I only want to talk about the good stuff, but not the bad stuff.’ So I just thought, ‘OK, no more.’ “

Said Washington, “I don’t want to sound smug about it… but the point is to do what’s best for me. I have girlfriends in this business who talk about their personal lives, and it works for them, and I love it. But not for me.”

Washington may also be celebrating twice this fall. Glamour just named her its annual Woman of the Year. “Her rare combination of talent, humility, strength, and selflessness defies limits. She is a gift to us all, and I’m proud to call her my friend,” said singer Alicia Keys.

Washington’s rep would not comment on the baby news. Fans may get a sneak peek at Washington’s baby bump, if it exists, as the actress hosts Saturday Night Live this weekend on Saturday, Nov. 2.

Scandal fans will likely have strong reactions to an Olivia Pope pregnancy and we’re still waiting to hear if writers would be willing to incorporate Washington’s alleged pregnancy into the show.