Kristin Cavallari is reportedly pregnant with her second baby by husband Jay Cutler! 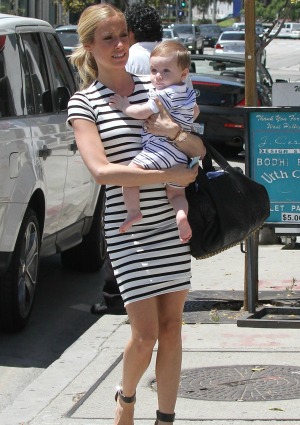 Baby will soon make four for Kristin Cavallari and Jay Cutler! The reality star is reportedly pregnant with her second child.

While the now-fashion designer has not directly confirmed the news yet, she has definitely let it be known that the couple have been hoping and trying for a new addition to the family.

“We want to have a second sooner rather than later,” the 26-year-old told E! News at a Junk Food Vintage NFL event in New York several weeks ago. “We’re working on it! We know we want another one close in age to Camden and we’re at the point where we’re both ready.”

“Before Camden was born, I thought I’d be pregnant again by the time he was six months, but I definitely wasn’t ready. Now, I’m finally ready.”

So is the couple hoping for a pink or blue bundle?

“Obviously, I want a little girl, but if I had another boy I would be so excited as well,” she told E!. “I love having a boy. Either way, I’d be really, really happy.”

Cavallari may have hinted at her condition in a recent Twitter post, in which she said she skipped the gym in favor of baking. Nesting?

The couple’s first child, Camden, was born in August 2012. She and NFL star Cutler wed almost a year later, in July 2013. The couple have experienced their share of rocky times. They originally got engaged in April 2011, only to call it off later that summer. They reunited in November 2011, and the couple announced their first pregnancy in January 2012.

But now they live happily ever after!