On “Death and the Maiden,” our suspicions were confirmed when Miranda didn’t make it out of the river alive. By the end of the hour, she not only revealed herself to Caleb, but assured him that they were all meant to die in the accident. 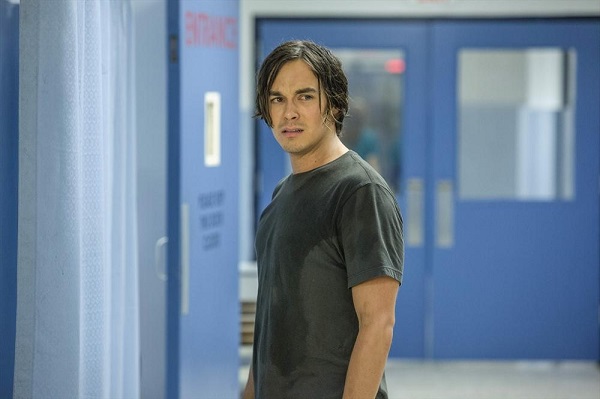 Caleb is the only new kid left in Ravenswood. At least, the only one left alive. He only stayed in town to help Miranda find her family and get situated, but her death gives him a completely new purpose — to find out why her spirit is stuck in Ravenswood and why an entity might want the other four passengers who made it out of the car alive to follow her to the grave.

It was sad to see how little impact Miranda’s death made on the survivors. She was known best by Caleb, and their meeting was only brief, but it was to him that she made an appearance. Something tells me that the stronger she gets, the more likely she will be to visit those who don’t believe she’s still hanging around.

The supernatural aspects of Ravenswood were increased during “Death and the Maiden” and they included Miranda’s ghostly visits to Caleb, coins standing on edge, rattling morgue drawers, car doors opening on their own and an attempt on Luke’s life by a free weight. Nothing in Rosewood prepared Caleb for any of it.

Remy’s in a bit of trouble since she was driving the car in which a young girl was killed, and she’s still very interested in the connection between returning members of the armed services and quickly followed by the deaths of five teens. She discovered another similar situation in 1992.

When Miranda showed up in what appeared to be corporeal form to Caleb, she told him she thought she wasn’t alone, and that the entity with her had been waiting for them for a very long time. That would mean the four who got away are going to be on its hit list, and Miranda could be the only communication between the planes of life and death keeping Caleb, Remy, Olivia and Luke from joining her.

It sounds a bit like Final Destination, doesn’t it? Somehow the four survivors cheated death, and someone (or something) isn’t happy about it.

It’s rather surprising that the people in Ravenswood seem so nice. Almost all of the adults that Caleb encountered treated him with so much kindness. The morgue attendant offered him half a tuna sandwich, the policeman spoke nicely and offered a refill for his coffee and Mrs. Grunwald and Mr. Collins offered him a place to stay.

If judgment had been passed on the residents of Ravenswood strictly by the experiences Hanna, Aria, Spencer and Emily of Pretty Little Liars had when they were in town, then it would seem Caleb wouldn’t be in good hands at all. Instead, it feels like he’s safer in Ravenswood with the guiding hands of Collins and Grunwald and all of their experience with the supernatural forces around them than he was in Rosewood where the adults didn’t have a clue of the dangers facing their children.

The infighting between the adults and between the teens is business as usual. There is at least one member of every family who is hating on a member of another and threatening them to stay away. Since Caleb brought along bad luck with his bus ride into Ravenswood (an argument can be made that it was already there), he’s not the most popular guy in town.

Ravenswood — was a spirit born out of the accident? >>

Once Caleb shares with Remy his visit from Miranda, the two of them are bound to get the others involved in trying to figure out a way to make sure they don’t end up at the bottom of the river or a similar fate. If more of them get to see her, maybe there will be more probing along the lines of Caleb’s question of what death was like. Nobody ever seems to ask something so obvious, but it felt right when Caleb did.

We’re only two episodes into Ravenswood and there is a really solid foundation being built for a long-lasting mystery. Who is the entity that has been plaguing the town for generations? Can answers be found in the cemetery, or will the grave be gone by the time they pin it down? Will Luke, Remy and Olivia soon find their faces on gravestones, as well? What do Collins and Mrs. Grunwald know?

It will be exciting to find out!