It’s been a long wait, but the first trailer for X-Men: Days of Future Past is here. Unlike most superhero trailers, this one features little to no action. 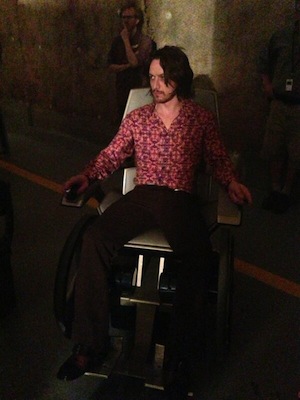 After last week’s teaser, 20th Century Fox has released an official trailer for X-Men: Days of Future Past. It’s the follow-up to X-Men: First Class, which introduced an entirely new cast. James McAvoy and Michael Fassbender took over as Professor Xavier and Magneto, following Patrick Stewart and Ian McKellen.

X-Men Days of Future Past gets Instagram sizzle reel >>

In Days of Future Past, all four actors will appear in the same film. The movie is heavily centered on time-travel, which allows both the younger and older versions to co-exist. The only constant amongst the two is Wolverine (Hugh Jackman), who’ll travel to the past.

Director Bryan Singer is still editing the film, so most of the special effects aren’t done. Therefore, the following trailer is more of a character piece. The action takes a backseat to the film’s more emotional moments. The somber score and looks of terror and heartache speak volumes about the story.

In Days of Future Past, mutants are on the verge of extinction thanks to a man called Bolivar Trask (Peter Dinklage). Because of him, both heroes and villains join forces in order to stay alive.

X-Men: Days of Future Past opens in theaters May 23.

What do you think of the first trailer?