Camille Grammer has won a restraining order against her boyfriend, claiming he beat her for over an hour while she was recovering from cancer surgery. 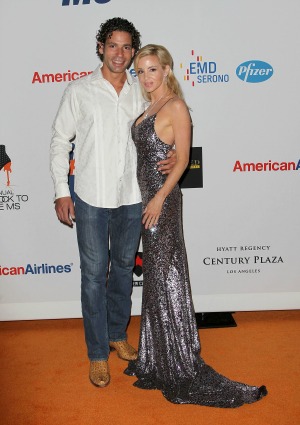 Camille Grammer is feeling safer today after winning a restraining order against her alleged abuser.

On Monday, The Real Housewives of Beverly Hills star posted a series of tweets accusing someone of beating her up while she was recovering from a radical hysterectomy following a diagnosis of endometrial cancer. She was careful not to throw the name of her abuser up on the internet, but suspicion among fans immediately fell upon her boyfriend Dimitri Charalambopoulos.

Turns out the speculation is correct. The reality star was granted a restraining order against her former flame today after her lawyer filed a declaration detailing the alleged attack.

In the court documents, Grammer said the incident started just days after her major surgery at around 1:30 in the morning, when another woman began texting and calling Charalambopoulos, triggering an argument.

Grammer claims Charalambopoulos “squeezed my nose between his finger[s] and pushed upward forcefully, covering my mouth in an attempt to silence me to prevent me from breathing,” and wrestled her onto the hotel bed, “repeatedly slamming my head and face into the furniture and completely immobilizing me.”

When she tried to call for help, she said, Charalambopoulos smashed her iPhone and told her, “I wanna smash your head in. I’ll give you a reason to call the cops.”

Grammer said the attack lasted for 40 minutes to an hour and that she feared for her life. When the violence stopped, she said, Charalambopoulos told her he would knock her out cold if she moved from the bed.

A judge granted a temporary restraining order, and now Charalambopoulos must stay at least 100 yards from the reality star and her two children at all times. It is unclear if criminal charges have been pressed at this time.