It’s been a tough week for Julianne Hough, but her big brother Derek Hough speaks up about her Halloween blackface mistake. 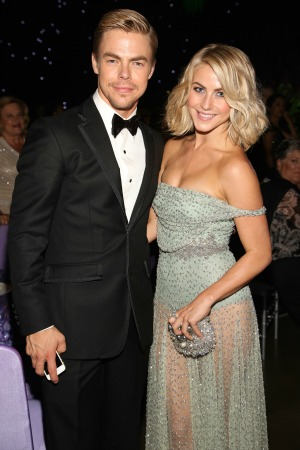 Halloween 2013 is probably a holiday Julianne Hough would like to forget, but her big brother Derek Hough is jumping to her defense. The Dancing With the Stars pro talked to E! News about his little sister’s big mistake.

The ballroom dancer said, “She’s so apologetic. She’s so, so sorry and I just hope that we can all forgive her and move on.”

Julianne is a fan of the Netflix hit show Orange Is the New Black. She decided to dress up like the character Crazy Eyes, played by African-American actress Uzo Aduba. The 25-year-old donned an orange jumpsuit, prison badge, hair knots and painted her face with dark makeup for a Halloween party last Friday.

The outrage on Twitter was immediate once the photos were posted online. In fact, Julianne walked out of the party with her dark makeup removed from her face, so clearly she knew the reaction was negative.

Derek told the entertainment site that his sister was “mortified” by her grave error.

The Emmy winner shared, “She’s my little baby sister and she’s the sweetest thing ever. She is just beyond beside herself.”

Julianne publicly apologized on her Twitter feed on Saturday stating, “I am a huge fan of the show Orange is the New Black, actress Uzo Aduba, and the character she has created. It certainly was never my intention to be disrespectful or demeaning to anyone in any way. I realize my costume hurt and offended people and I truly apologize.”

Her big brother knows this was a very public lesson that his sibling learned, but he hopes the event is behind her.

Hough explained, “Obviously, it wasn’t her brightest moment in her life, but hopefully we can move on.”