If the latest story is true, Brad Pitt has given up soap in an effort to be more environmentally conscious and avoid the use of harmful chemicals. The effect on his smell, however, has not been as positive. 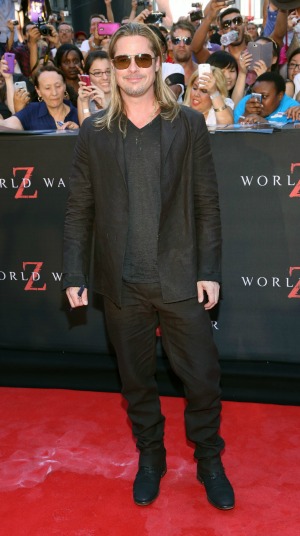 Brad Pitt is known to be very environmentally conscious, a strict vegan and is part of many humanitarians and global green initiatives.

But it appears the actor has taken his love for the earth to a whole new level, because apparently he has stopped using soap.

This latest rumor that the actor has decided to forgo traditional methods of washing and has opted for a method that is far more environmentally friendly does appear to be a tad absurd.

The World War Z actor has apparently decided to wash himself with a unique homemade concoction that consists of water, apple cider vinegar and lemons.

A source revealed to Bang Showbiz, “Brad says he’s read up on the toxins of soap — especially the antibacterial ones — and feels that using them and antiperspirants is not only bad for the planet, but it also speeds up the aging process in humans.”

While we applaud the 49-year-old actor’s eco-friendly efforts, his smell has apparently not been welcomed by members of his family, who apparently think his new washing methods are not having the desired effect.

The source continued, “Angelina was revolted — and their kids even started calling him ‘Stinky Daddy.'”

“Angie agreed to humor him only as long as they weren’t on the same continent.”

Pitt is in London filming his latest movie Fury, and his fiancée is directing her second movie Unbroken in Australia — so if the rumors are true the distance could be the only reason that soap has not once again been forced upon the actor.

It is hard to believe that Pitt would ever smell, but if the rumors are true at least it is for the greater good. What do you think?