Rihanna is a multimillionaire and has conquered the music world and gathered fans across the globe. Now, her next mission is a trip to space… 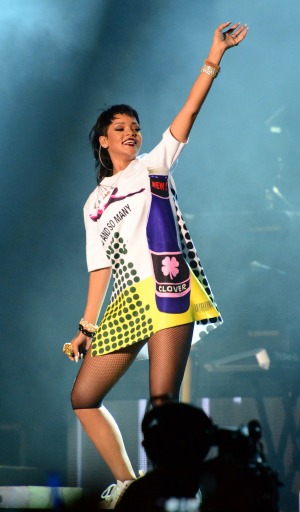 Rihanna has become a multimillionaire and is celebrated for her musical brilliance across the globe, but the pop star has bigger plans for herself and they include a trip to space.

The world’s first commercial space line is expected to launch next year and more than 500 people will secure their seats for an out-of-this-world experience.

The “Diamonds” singer is apparently on the waiting list for next year’s space trip and will be taking two very lucky companions with her.

Her companions will include her younger brother Rorrey and her bodyguard — the perks of being Rihanna’s bodyguard are looking rather appealing right now.

A source has revealed to the Daily Star newspaper, “Rihanna has already put down a deposit for the flight.”

“She has been obsessed with space since she was a child so it would be a dream come true for her.”

Other passengers on board the space mission includes Sir Richard Branson himself and his children Holly and Sam. As well as some celebrity guests, including Leonardo DiCaprio, Brad Pitt and Angelina Jolie, and Ashton Kutcher and his girlfriend Mila Kunis.

Branson revealed his plans at the media conference at Britain’s Farnborough International Airshow in July 2012, saying, “Next year Holly and Sam will be joining me for a first voyage into space.”

It may be a slight delay, but the plans are still very much in motion and The Virgin Galactic website states seats are $250,000 each. Potential passengers will be required to complete G-force training before embarking on their two-hour trip.

Rihanna certainly has the money to spend on the trip as she is reportedly worth more than $43 million. Money well spent, if only she was going to be performing a concert in space… now that would be making headlines.